ANCIENT MIS-READINGS OF THE BOOK OF REVELATION 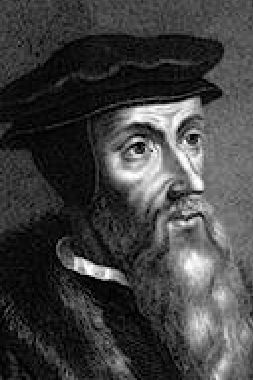 John Calvin wrote a commentary on every book of the Bible, except the Book of Revelation. Eighteenth century Bible Commentator, Matthew Henry, perhaps the most read and accessible commentary available today, did not write a commentary on the Book of Revelation before he died (it was written posthumously by someone else). Since such great minds as Calvin and Henry were reluctant to tackle the Book of Revelation, any new contender offering an explanation of the Bible’s concluding book would be well advised to do so with great caution. Added to this is the poor record of other great minds of history who have dared to claim to understand the details of Revelation enough to make bold declarations of when Christ would return and the end of the world would be! Consider these people and their interpretations… 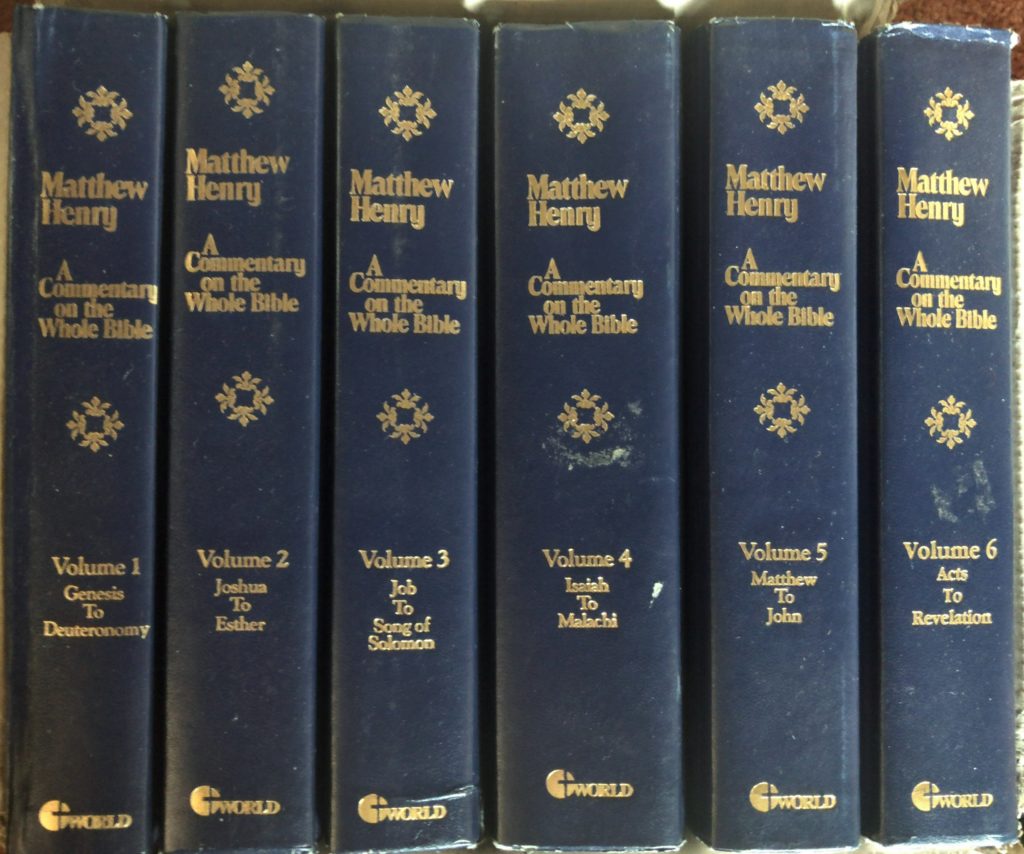 FROM THE SECOND AND THIRD CENTURIES 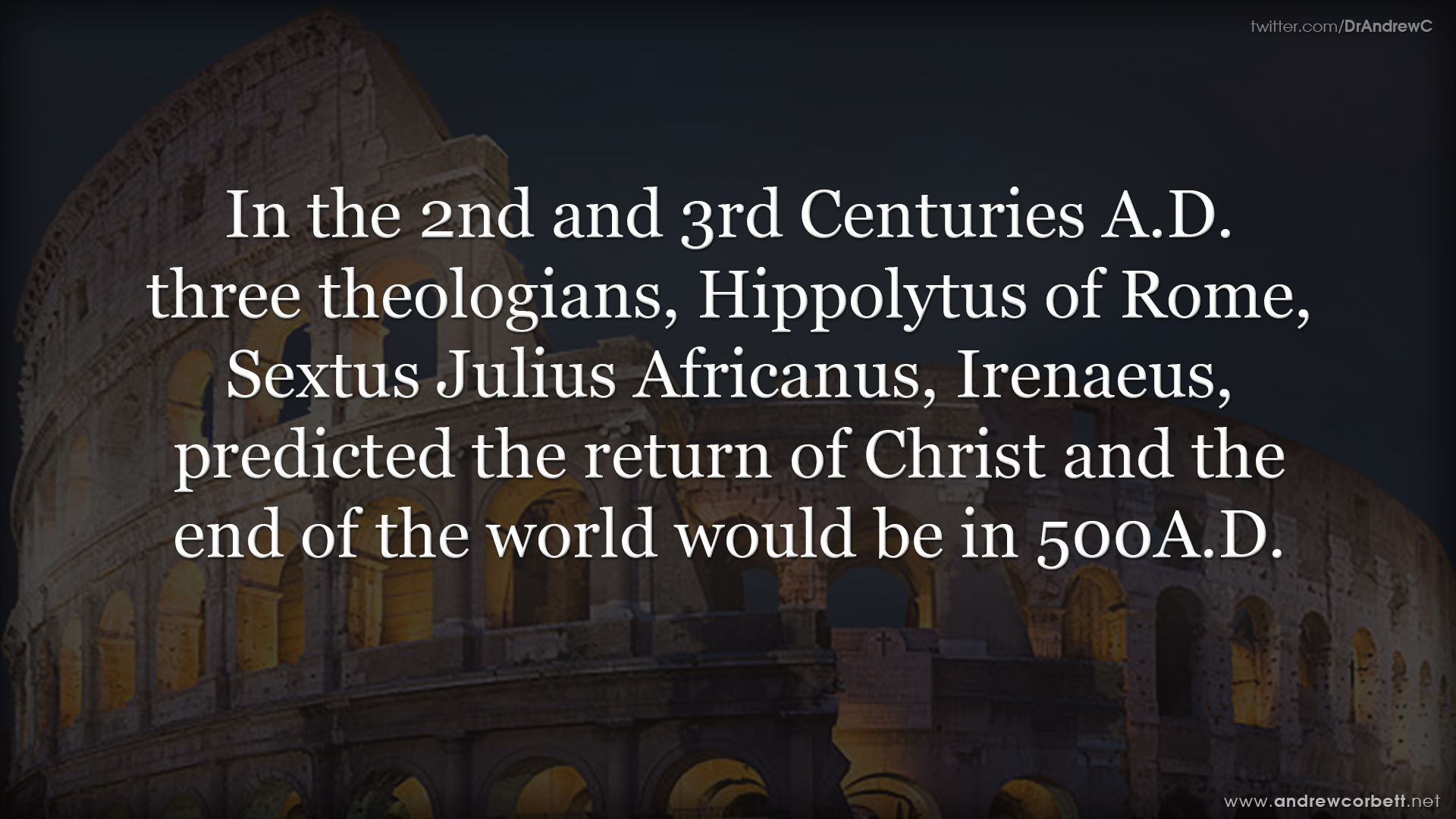 Irenaeus (140 – 202) was the disciple of Polycarp who himself was the disciple of the Apostle John. He proposed a method of interpreting the Book of Revelation that including the measurements of Noah’s ark. His views were particularly promoted by two third century church leaders, Hippolytus of Rome and Sextus Julius Africanus. Their conclusion was that Christ would return and that the end of the world would occur in 500A.D. But their method for interpreting the Book of Revelation soon became demonstrably wrong. Yet, for many church leaders, it seems to have sown the idea that the goal of interpreting the Book of Revelation was to determine how it predicted events for our lifetimes – to the extent of seeing the end of world coincide with the return of Jesus.

It’s worth noting that shortly after this speculation about the Book of Revelation, the Church Council at Nicea Turkey formulated a creed, The Nicene Creed, which was, and is, universally accepted by Christians. 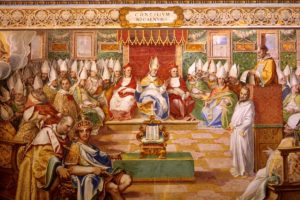 WE BELIEVE in one God, the Father Almighty,
Maker of heaven and earth, and of all things visible and invisible;

And in one Lord Jesus Christ, the only-begotten Son of God,
begotten of the Father before all worlds, God of God, Light of Light,
Very God of Very God, begotten, not made,
being of one substance with the Father, by whom all things were made;
who for us men, and for our salvation, came down from heaven,
and, was incarnate by the Holy Spirit of the Virgin Mary,
and was made man, and was crucified also for us under Pontius Pilate.
He suffered and was buried, and the third day he rose again according to the Scriptures,
and ascended into heaven, and sitteth on the right hand of the Father.
And he shall come again with glory to judge both the quick and the dead, whose kingdom shall have no end.

And we believe in the Holy Spirit, the Lord and Giver of Life,
who proceedeth from the Father and the Son, who with the Father and the Son together is worshipped and glorified, who spoke by the prophets.
And we believe one holy catholic and apostolic Church.
We acknowledge one baptism for the remission of sins.
And we look for the resurrection of the dead, and the life of the world to come.
Amen.

The reason understanding this creed is important if we are seeking to properly interpret the Book of Revelation is that it makes a very clear and important statement about what the early Church believed about the return of Christ. “He shall come again with glory to judge both the quick (living) and the dead, whose kingdom shall have no end.” This statement declares –

2. When Christ returns it will coincide with His judgment of all the living and the dead.

3. Subsequent to Christ’s judgment of all people, He shall rule in a world where evil, injustice, and sin are banished.

It is worth noting how simple this primitive eschatology (doctrine of last things) was.

FROM THE EIGHTH CENTURY

An exact copy of Beatus of Liébana’s 460 page commentary on Revelation originally copied in 970AD.

FROM THE ELEVENTH CENTURY 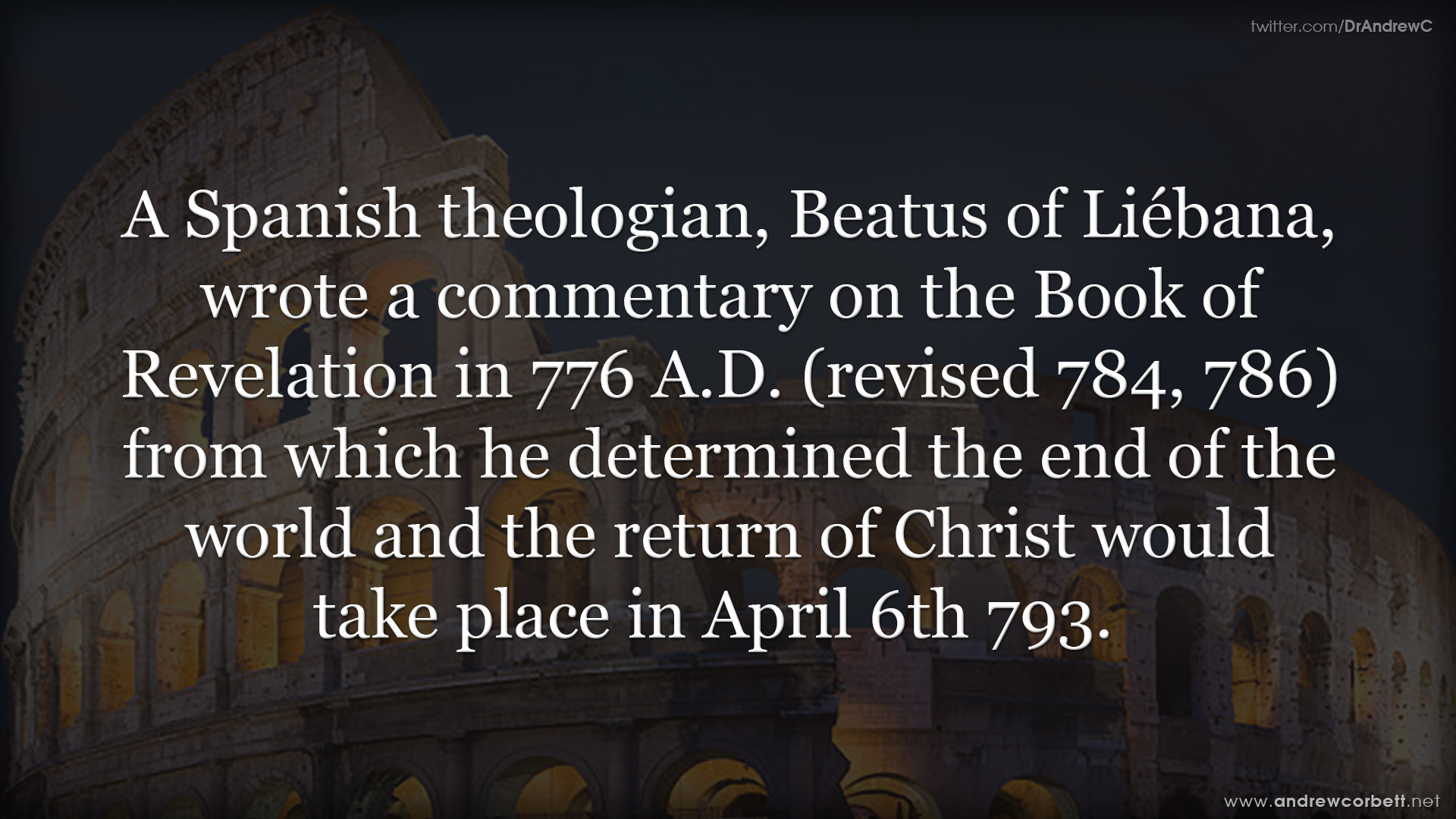 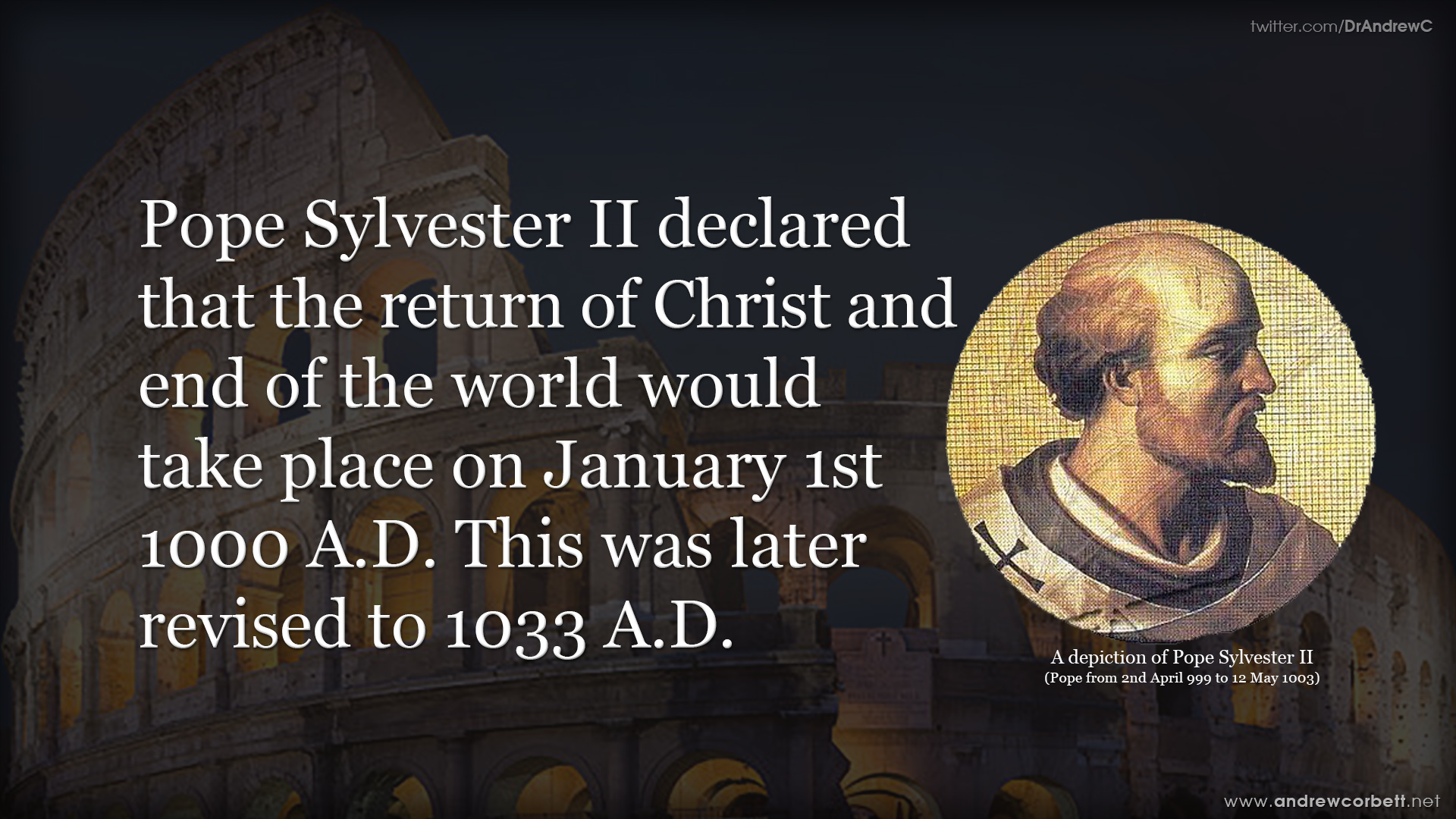 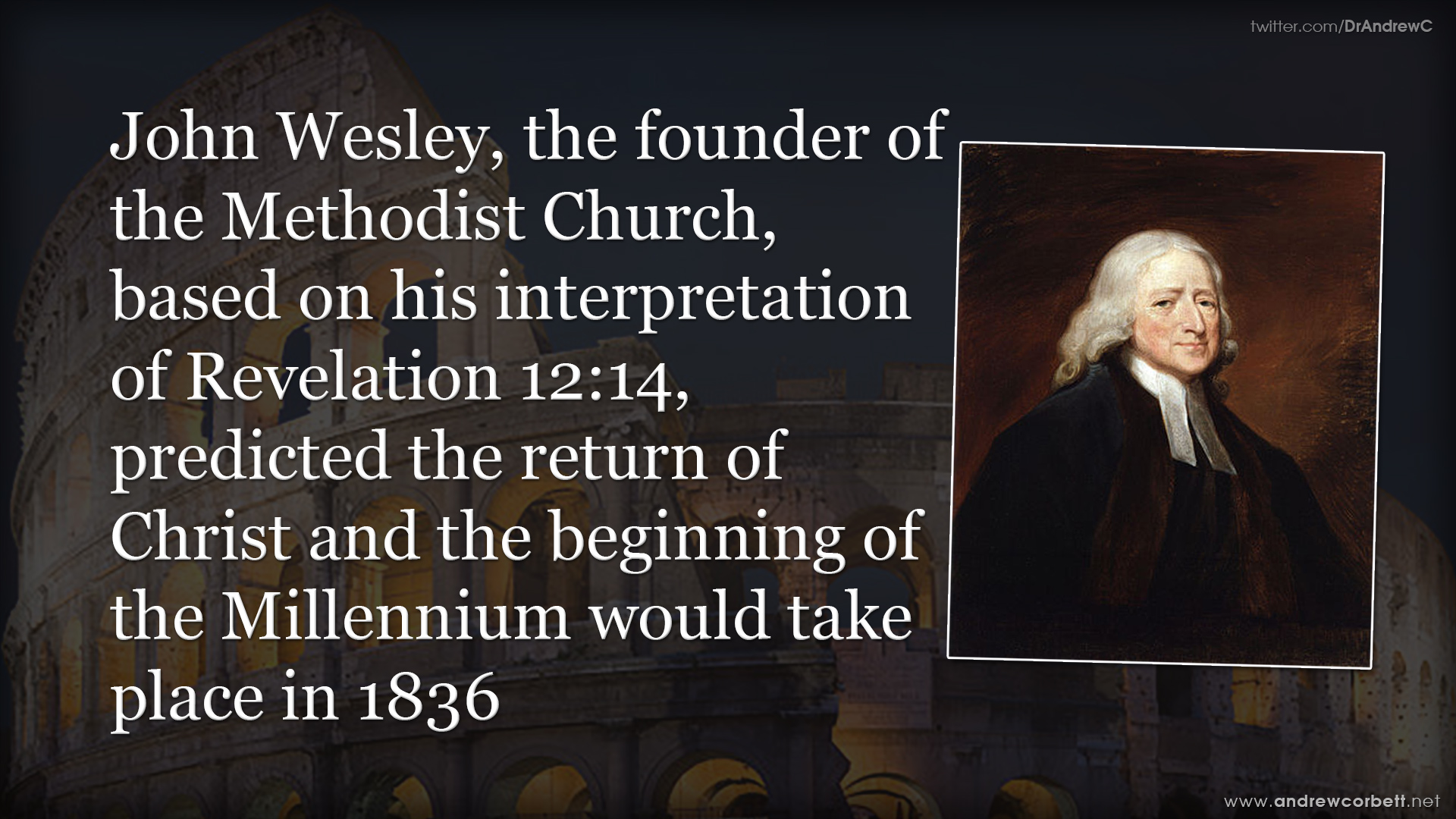 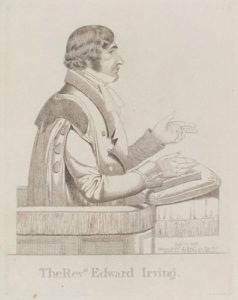 Before Wesley’s curious interpretation of Revelation 12:14, the preceding Reformers had virtually in unison interpreted the Book of Revelation as predicting the rise and fall of the Roman Catholic Church. Their view of Revelation became known as Historicism because they saw history unfolding through the pages of Revelation to their present day. In response to this, Roman Catholic authors such as Jesuit Priest, Emmanuel Lacunza (who used the pseudonym Juan Josafat Ben-Ezra), wrote a book, “The Coming of the Messiah in Glory and Majesty” which promoted a counter-view to Historicism called Futurism. This book heavily influenced a Protestant minister, Edward Irving (1792 – 1834), a Church of Scotland Minister, who translated it from Spanish into English. By 1832, Irving’s public lectures on the Book of Revelation were attracting large crowds and laid the groundwork for the rise of Dispensational Millennialism.

IN THE NINETEENTH CENTURY

The 19th Century seemed to be a time when speculation about the Book of Revelation abounded. Two very influential views began in the 19th century. For example, In 1831 both Edward Irving and John Nelson Darby began to postulate a two-staged return of Christ. Some believe that Irving was influenced by a young girl, Margaret McDonald, who apparently received this ‘revelation’ from the Lord of a “rapture” of the Church before a time of Great Tribulation at the end of the age. The view that Edward Irving and John Nelson Darby helped to birth is known as ‘Dispensationalism’. It’s interesting to note that the concept of the ‘rapture’ had never been heard of before this time. 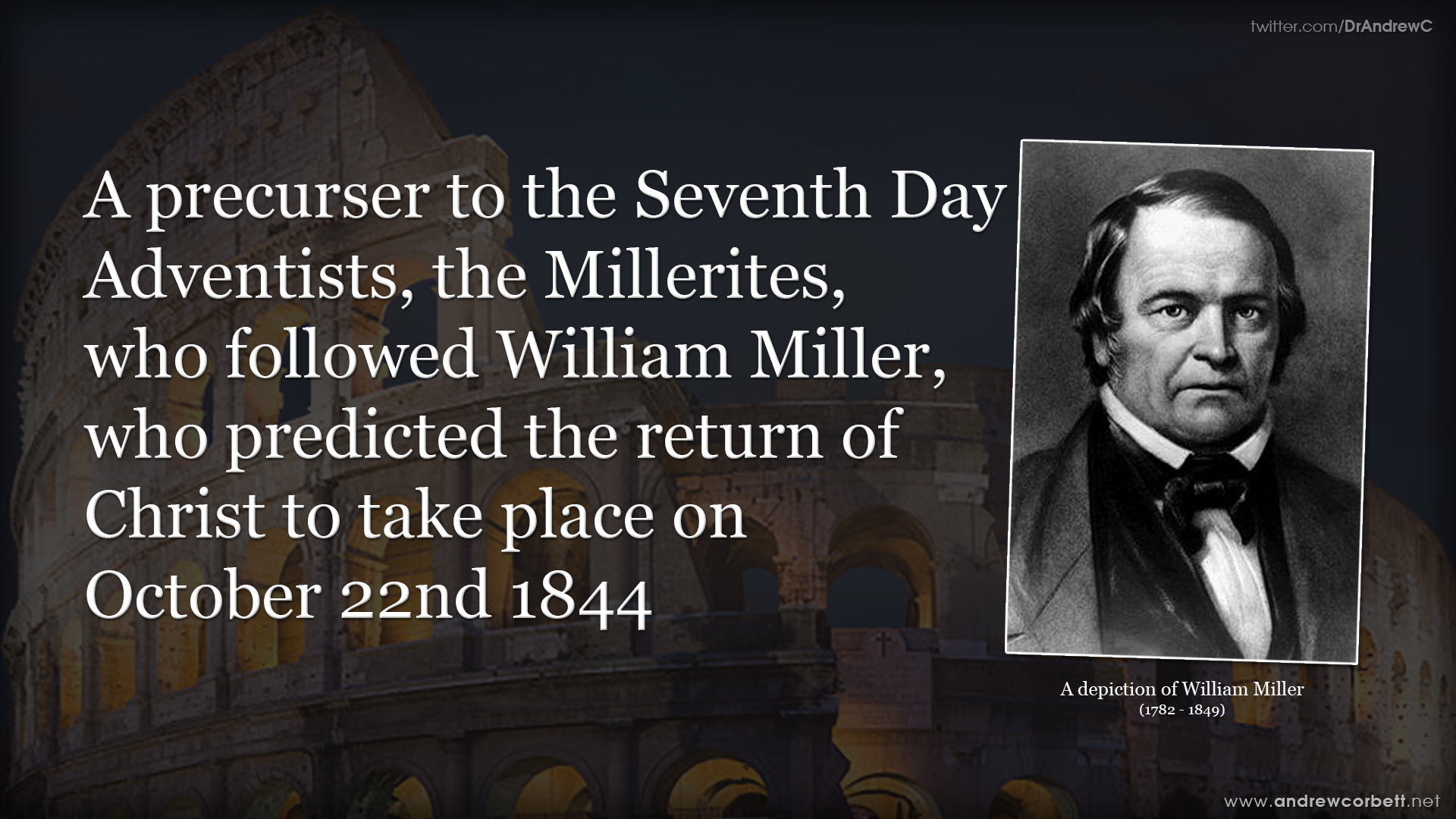 Other preachers also became fascinated with how the Book of Revelation should be understood. In America, William Miller (1782 – 1849) interpretted the ‘mark of the beast’ as the observance by the mainstream church of Sunday as the day of worship. His followers, the Millerites, became the precurser to the founding of the Seventh Day Adventists. William Miller’s understanding of the Book of Revelation led him to predict the end of the world and Christ’s return would be October 22nd, 1844. 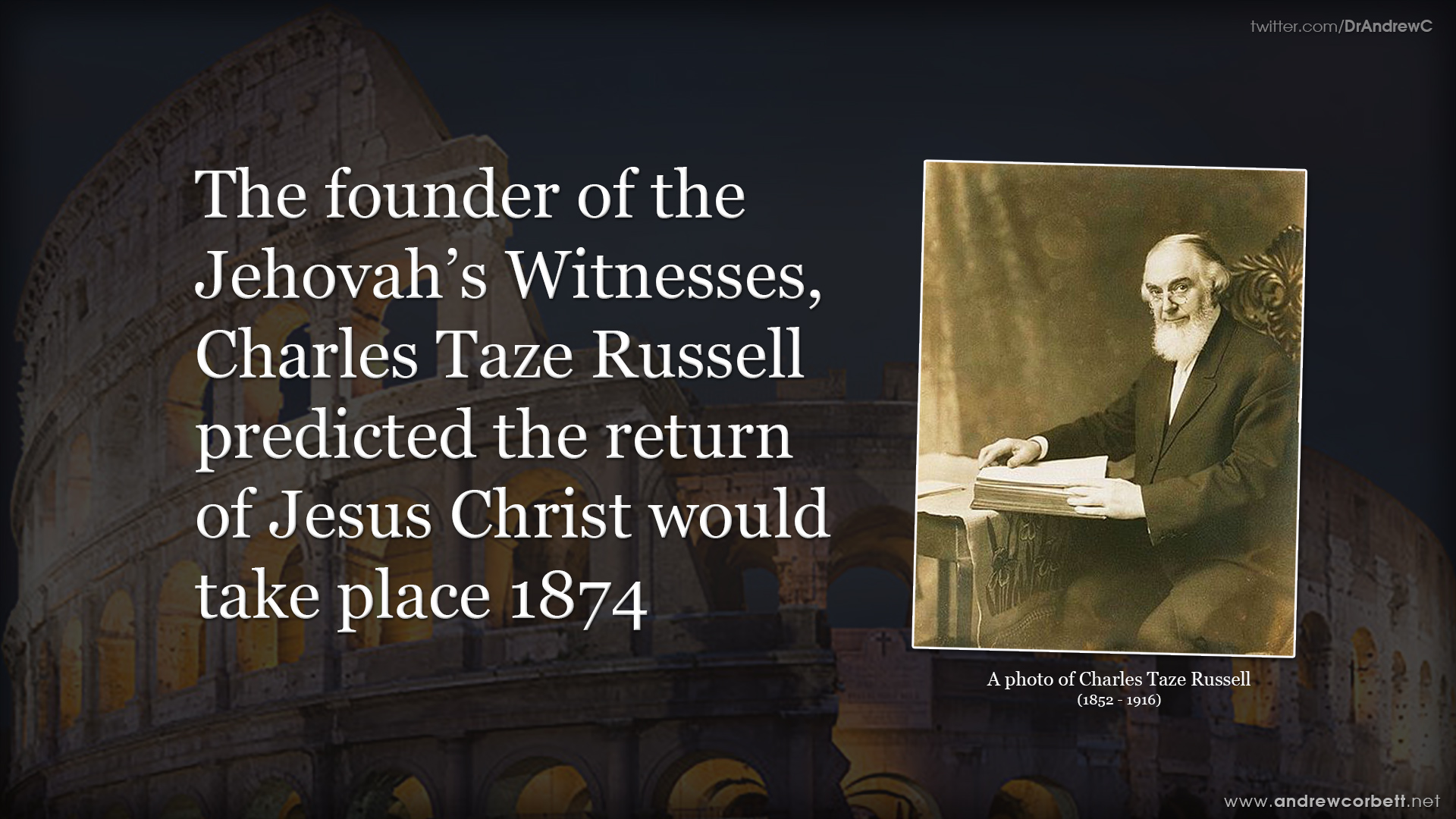 In a revival of another ancient heresy called Arianism, Charles Taze Russell began teaching that Jesus was the eternal Son of God. He also predicted that the Millennium would be an opportunity for everyone who has died without Christ, to receive a second chance to do so. He predicted Christ would return to establish this kingdom in October 1874  (See Watch Tower, 1906 July 15 for a detailed account).

In Russell’s doctrinal chronology the most important dates were 1874 and 1914:
“The chapter in SCRIPTURE STUDIES, Vol. II, showing the parallels between the Jewish and Christian Dispensations, makes prominent four dates, viz., (1) October, 1874; (2) April, 1878; (3) October, 1881, and (4) October, 1914;” Watch Tower 1911 June 15 p.190
“The careful student will have observed that the period designated ‘The Time of the End’ is very appropriately named, since not only does the Gospel age close in it, but in it, also, all prophesies relating to the close of this age terminate, reaching their fulfillments. The same class of readers will have noticed, too, the special importance of the last 40 of these 115 years (1874-1914), called ‘The End’ or ‘Harvest.'” Studies in the Scriptures Series III – Thy Kingdom Comep.121
FACTS ABOUT JEHOVAH’S WITNESSES – Failed Prophecies 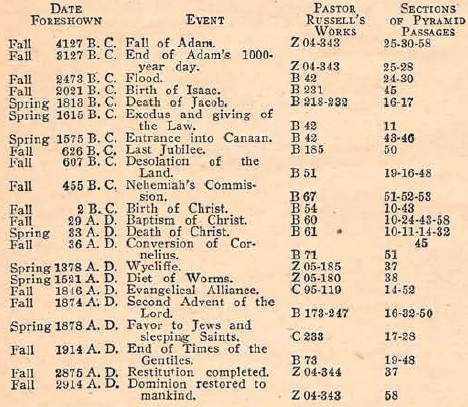 IN THE TWENTIETH CENTURY 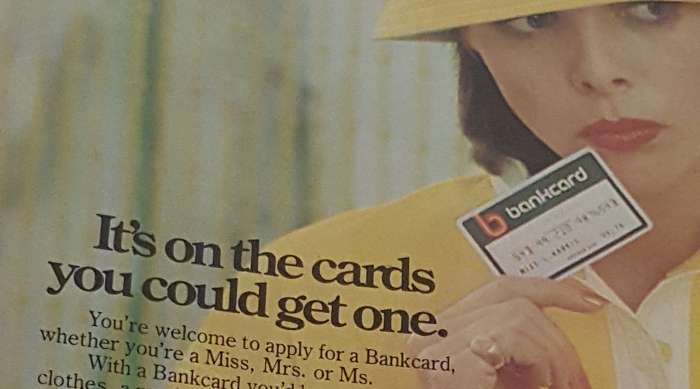 If Biblical Prophecy theories and guesses abounded in the nineteenth century, they exploded in the twentieth (just as they seemed to approaching the end of the first Millennium A.D.). Nearly every decade of the 20th century witnessed some new Prophetic Time-Line explanation of the Book of Revelation. Then there were the novelised series of books by Tim LaHaye and Jerry Jenkins, which sold in the millions, called Left Behind, which fictionalised the 1835 invention of the ‘rapture’. As the twentieth century drew closer to the turn of the new millennium, increasingly bizarre speculations increased which presumed that Dispensational Futurism was the correct interpretation of Revelation. As the introduction of credit cards became more popular from the 1970s, “End-Times” preachers widened their speculation about interpreting the Book of Revelation and interpreted the ‘mark of the beast’ as a computerised system of monitoring all people on planet earth. In Australia this speculation was also fuelled by the 1974 introduction of the ‘bankcard’ with its symbol which bore a striking resemblance to Revelation 13’s “666”. 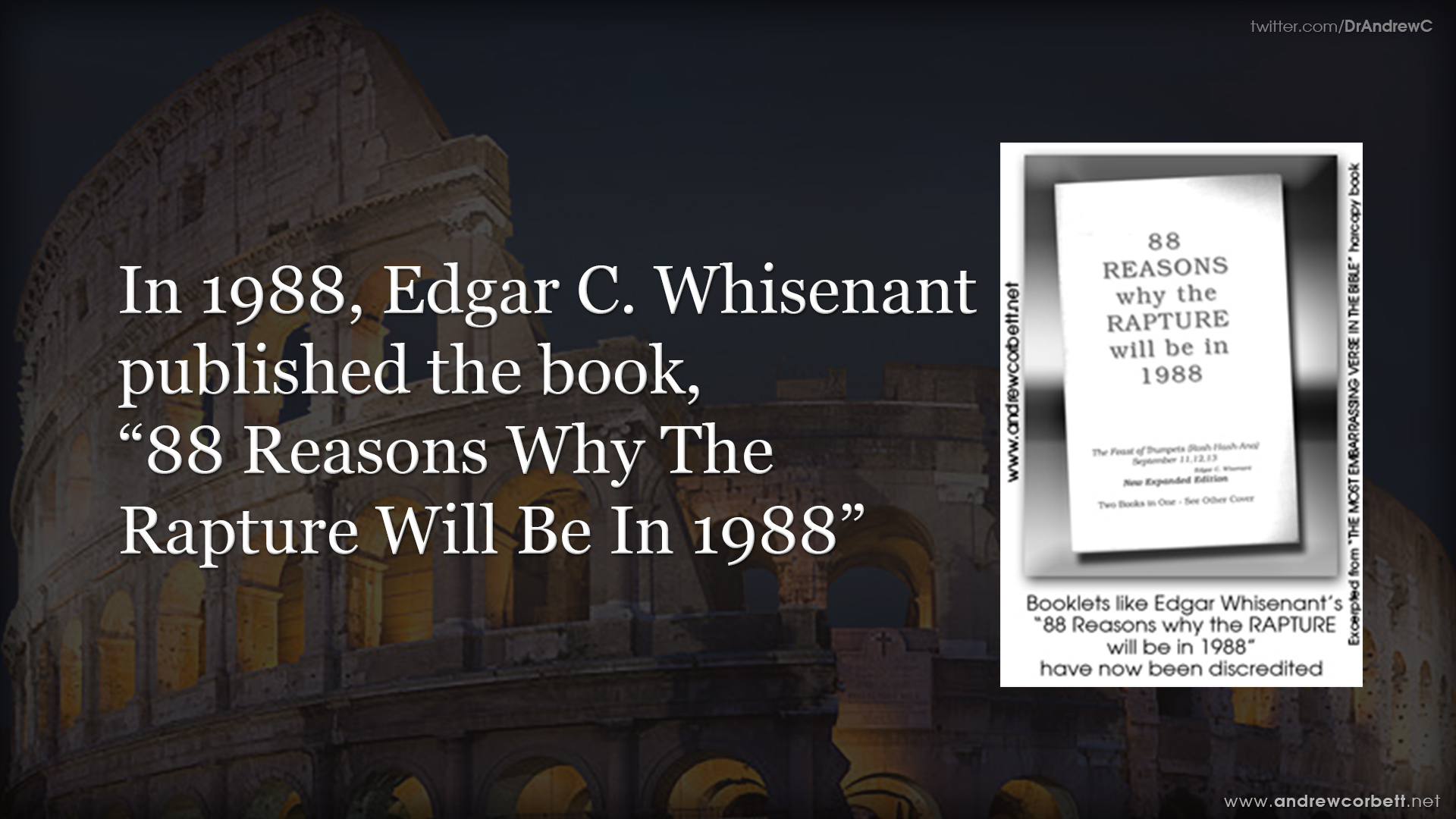 In the early 1980s, these End-Times preachers attempted to leverage the nationalising of Israel in 1948 to claim that the end of the world and Christ’s return would be forty years (the duration of a Biblical generation) after this event. This led to many of these preachers declaring that Christ would definitely return in 1988! Edgar C. Whisenant published a book along this line, “88 Reasons Why The Rapture Will be In 1988“. In 1988 Hal Lindsay published the first edition of his Late Great Planet Earth. 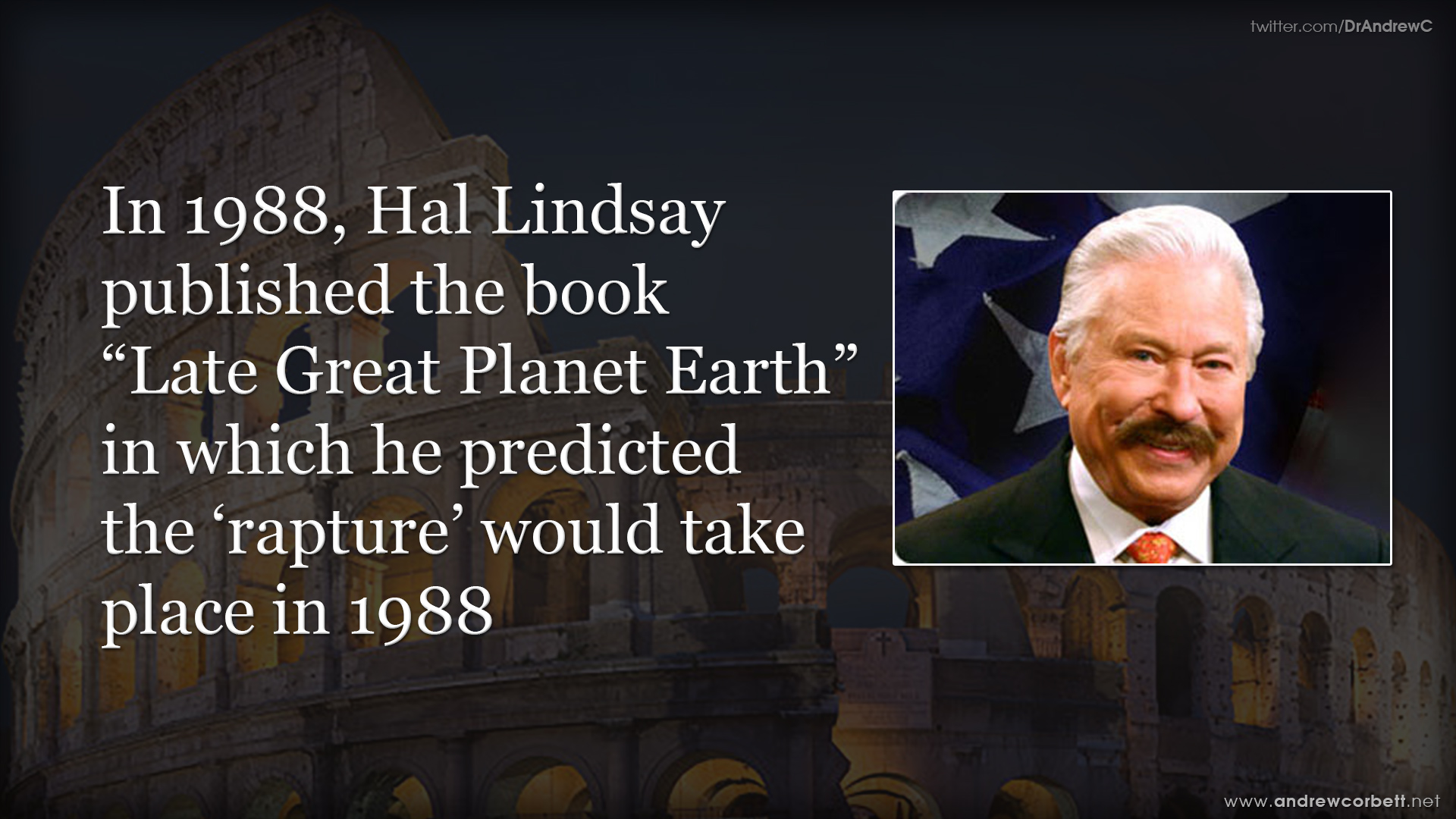 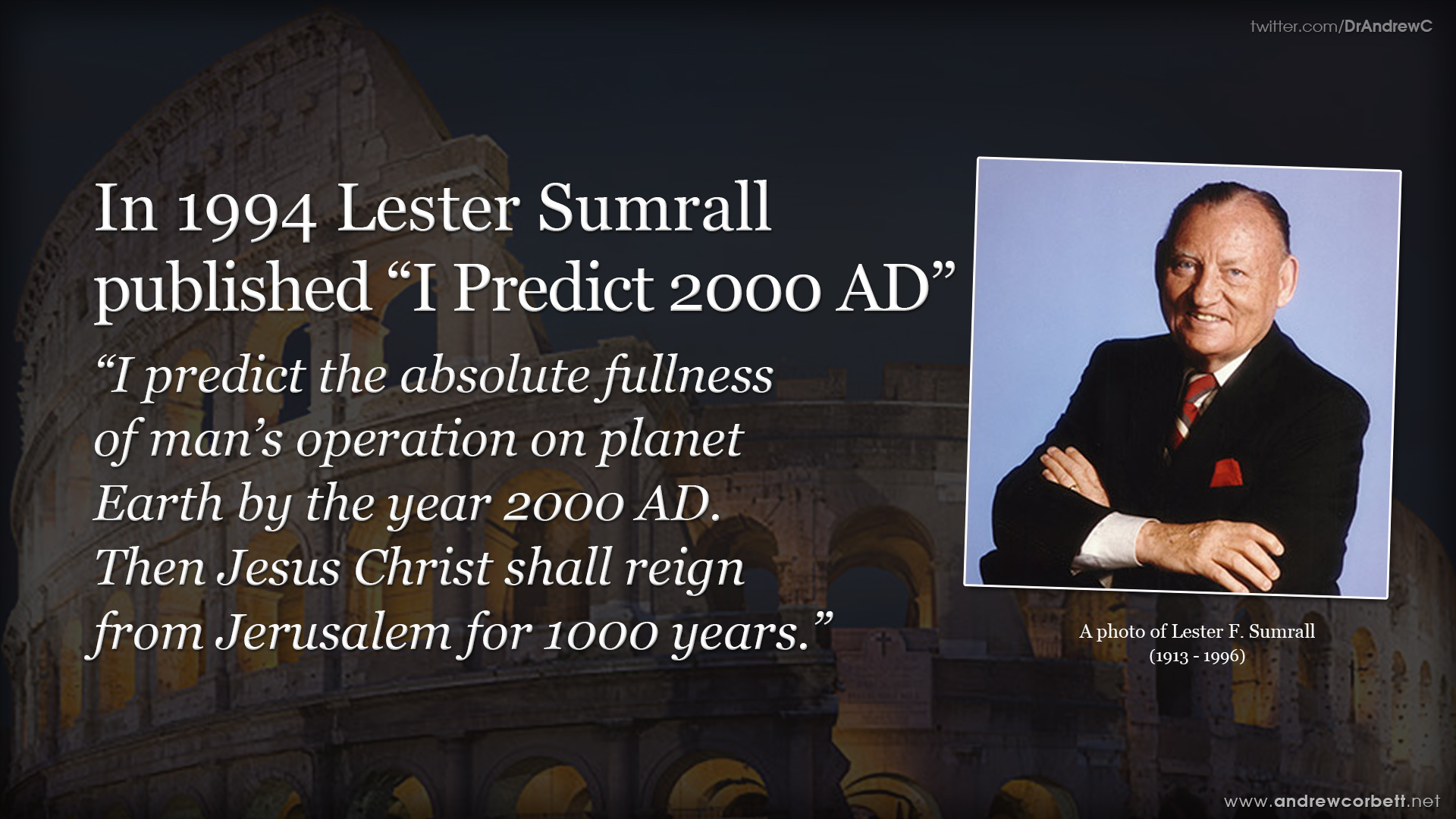 The rise of the ‘Televangelist’ in the 1980s was almost the perfect storm for speculative Bible prophecy prediction preachers. It seemed as if every televangelist had some 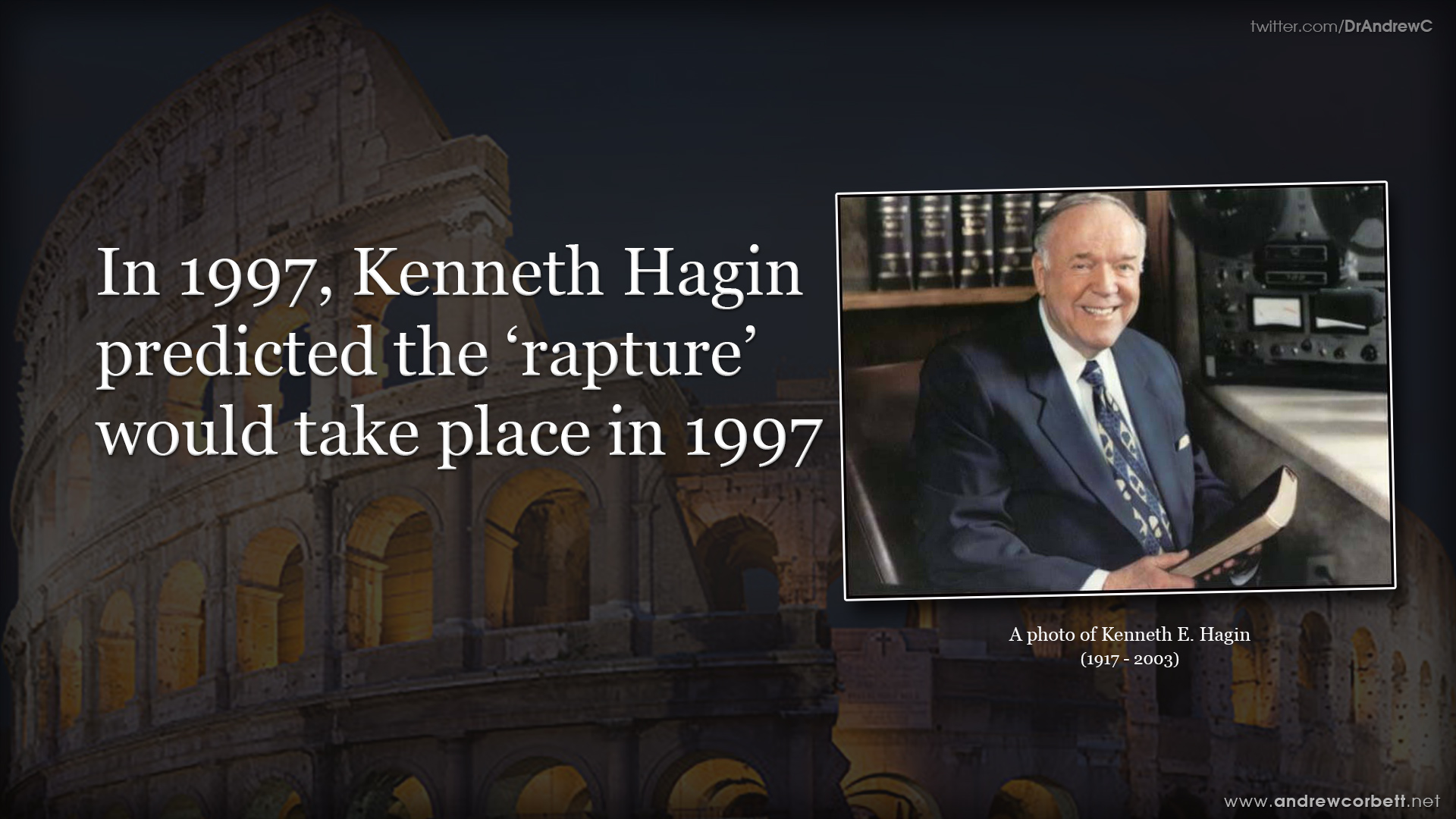 ‘revelation’ about the Book of Revelation that enabled them to know something about the future that no other televangelist knew. Apart from Hal Lindsay, other high profile televangelists began to make their predictions on when the ‘rapture’ would be, including Lester Sumrall who in 1994 declared that the millennium would begin in 2000. Three years later, not to be outdone, Kenneth Hagin predicted that the rapture would take place in 1997. Then in 1999, Jerry Falwell declared that the return of Christ would certainly happen within ten years and that the Anti-Christ was alive now and “was a male Jew”. 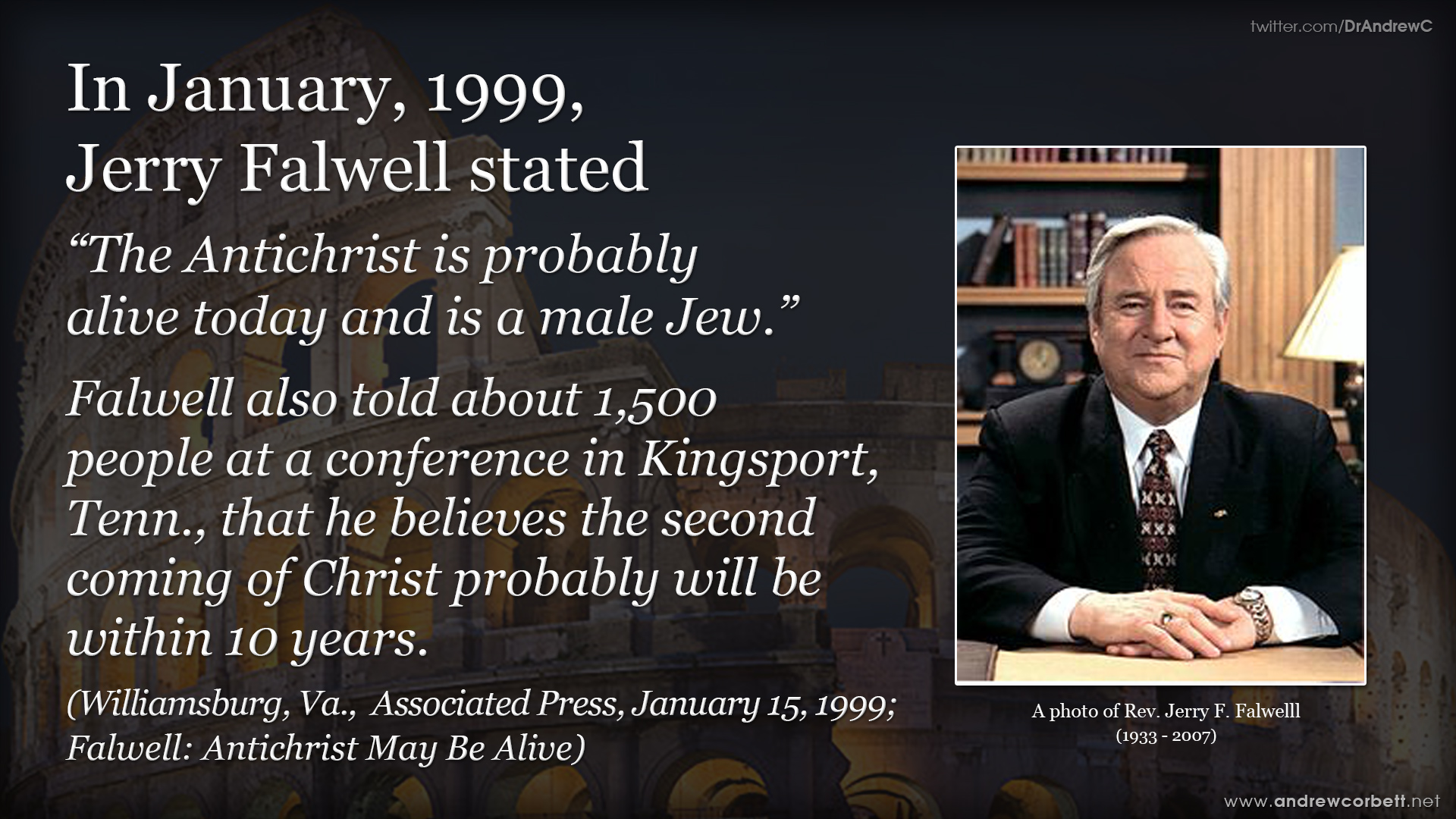 As happened after the turn of the Millennium in 1,000 A.D., speculative eschatology is becoming far less common. This is a good thing because it might cause us to examine the Book of Revelation by using the same hermeneutical principles that we use to interpret any other book of the Bible. These principles include –

I talk more about this in my eBook, The Most Embarrassing Book In The Bible, which you might find helpful if you would like to understand the Book of Revelation. 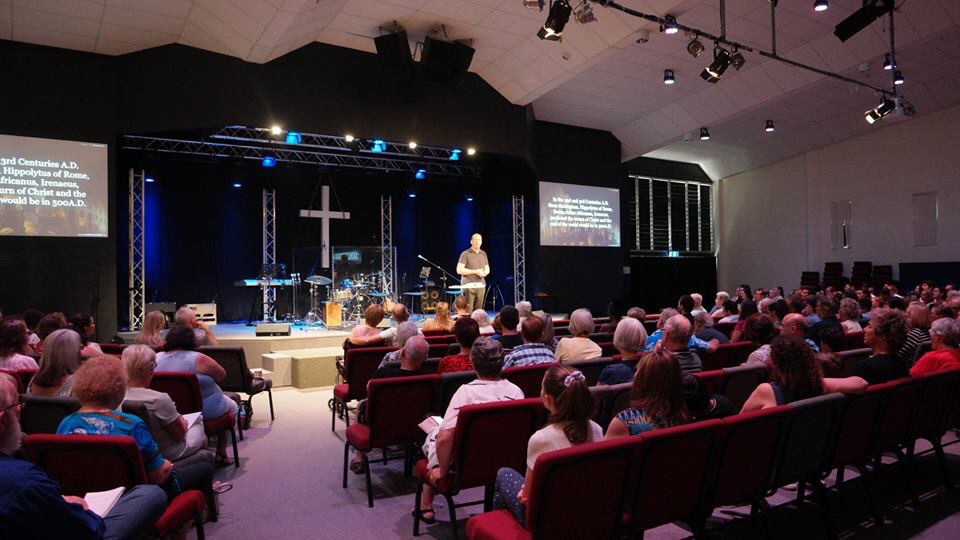