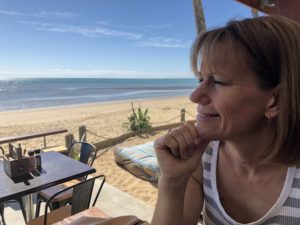 In May of 2018, I went on Annual Leave. Having just attended and spoken at the A2A Conference on the Gold Coast, we chose to tack onto the first part of our leave some time on the Fraser Coast (which is north of the more famous, Sunshine Coast). To our surprise and delight, the motel where we had booked our couple of week’s stay upgraded us to a room which had cable TV. Taking advantage of this perk I channel surfer to the Christian channels and landed at Daystar where Irvin Baxter was interviewing Pastor Paul Begley on his program, End Of The Age (May 7th, 2018). I had never encountered either of these men, who struck as being very zealous and sincere. But what they stated as being ‘Biblical’ and clear signs from the Bible that we are living at the end of the age was bewildering. And even more bewildering was their claim that God was using President Donald Trump as a modern-day Cyrus who would help to usher in the return of Christ by moving the American Embassy from Tel-Aviv to Jerusalem! 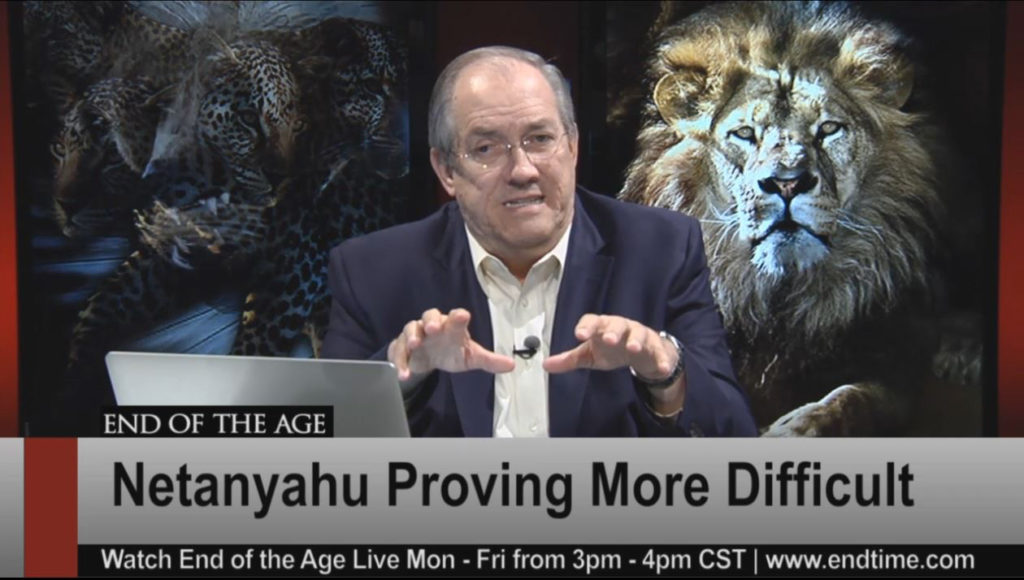 Dr. Irvin Baxter, END OF THE AGE, aired on Daystar

Pastor Paul Begley (West Lafayette, Indiana) was ‘interviewed’ by Irvin Baxter on Daystar, “END OF THE AGE”, claimed that President Trump’s recognition of Jerusalem as Israel’s Capital, and America’s decision to move their embassy to Jerusalem, was the fulfilment of Bible prophecy. Particularly Psalm 48:1 and Zechariah chapters 12-14. 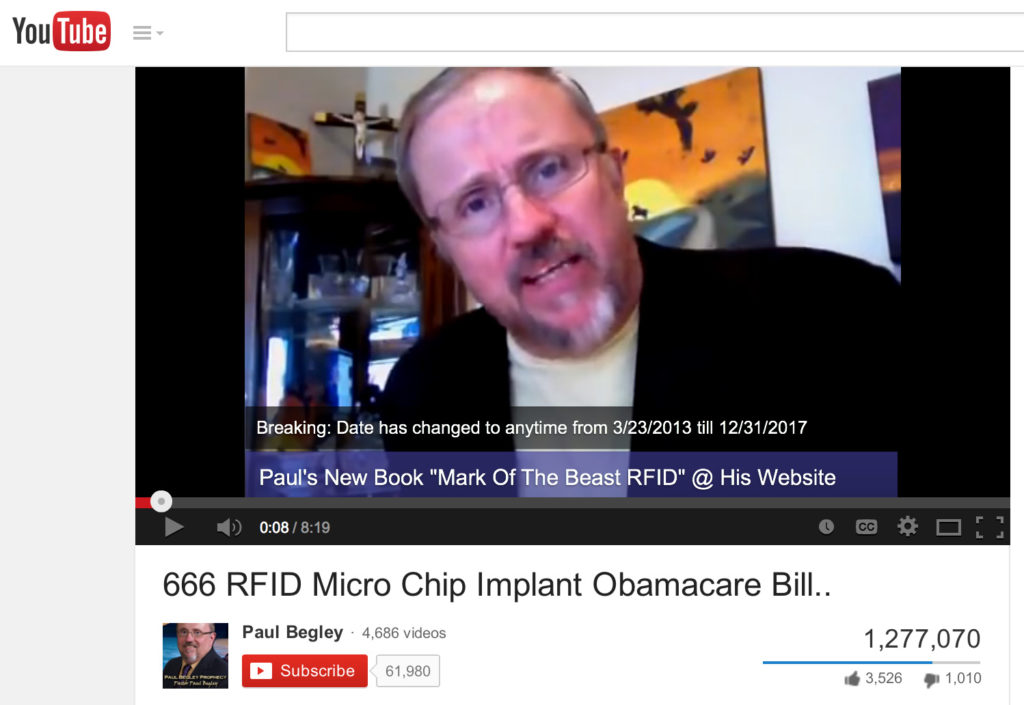 Pastor Paul Begley also made the astounding claim, “Donald Trump has a very similar anointing to that of Cyrus.” King Cyrus was instrumental in initiating the rebuilding of Jerusalem which set of a chain of events which set the stage for the coming the Messiah.

In the first year of Cyrus king of Persia, that the word of the LORD by the mouth of Jeremiah might be fulfilled, the LORD stirred up the spirit of Cyrus king of Persia, so that he made a proclamation throughout all his kingdom and also put it in writing:
¶ “Thus says Cyrus king of Persia: The LORD, the God of heaven, has given me all the kingdoms of the earth, and he has charged me to build him a house at Jerusalem, which is in Judah. Whoever is among you of all his people, may his God be with him, and let him go up to Jerusalem, which is in Judah, and rebuild the house of the LORD, the God of Israel—he is the God who is in Jerusalem.
Ezra 1:1-3

If I understand what Pastor Begley is either implying or categorically stating, is that he believes Donald Trump is initiating a chain of events that will usher in the return of Christ. His host, Irvin Baxter, has already made some very similar claims.

In the interview, Dr Baxter pressed Pastor Begley for some Scriptural support for his claim about President Trump. He offered Zechariah 12:2-3 as the Biblical basis for his claim.

“Behold, I am about to make Jerusalem a cup of staggering to all the surrounding peoples. The siege of Jerusalem will also be against Judah. On that day I will make Jerusalem a heavy stone for all the peoples. All who lift it will surely hurt themselves. And all the nations of the earth will gather against it.”
Zechariah 12:2-3

¶ Great is the LORD and greatly to be praised in the city of our God!
His holy mountain, beautiful in elevation, is the joy of all the earth,
Mount Zion, in the far north, the city of the great King.
Psalm 48:1-2

These are great examples of why Dispensation Eschatology is so unhelpful when it comes to advancing the cause of Christ and promoting the Scriptures as the reliable Word of God. Neither of these Scriptures give any hint that they are referring to President Donald Trump or any of his decrees. It wasn’t that long that Irvin Baxter featured Mark Robbins who was exploring the supposed Biblical claim that Donald Trump was the fulfilment of the New Testament’s prophecies about the AntiChrist! Such claims by self-proclaimed Bible prophecy experts makes the Bible seem ridiculous – which grieves me greatly. 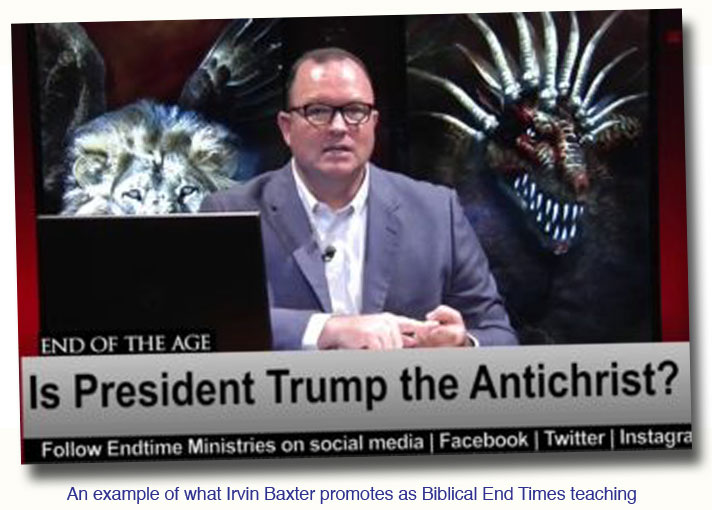 Do not despise prophecies, but test everything; hold fast what is good.
First Thessalonians 5:20-21

Whenever someone offers a prophecy – which would also include their claim of a fulfilment of a Biblical prophecy – we are obliged to test it based on the command in First Thessalonians 5:20-21. In this particular case, I think we should start with the Bible passages offered, and then apply the time-frame-fulfilment test.

Psalm 48 is an example of poetic adoration. The object is not so much Jerusalem, but the God who chose this most unlikely city.

¶ A SONG. A PSALM OF THE SONS OF KORAH.
1 ¶ Great is the LORD and greatly to be praised
in the city of our God! His holy mountain,
2 beautiful in elevation, is the joy of all the earth,
Mount Zion, in the far north, the city of the great King.
3 Within her citadels God has made himself known as a fortress.
4 ¶ For behold, the kings assembled; they came on together.
5 As soon as they saw it, they were astounded;
they were in panic; they took to flight.
6 Trembling took hold of them there, anguish as of a woman in labor.
7 By the east wind you shattered the ships of Tarshish.
8 As we have heard, so have we seen in the city of the LORD of hosts,
in the city of our God, which God will establish forever. Selah
9 ¶ We have thought on your steadfast love, O God, in the midst of your temple.
10 As your name, O God, so your praise reaches to the ends of the earth.
Your right hand is filled with righteousness.
11 Let Mount Zion be glad! Let the daughters of Judah rejoice because of your judgments!
12 ¶ Walk about Zion, go around her, number her towers,
13 consider well her ramparts, go through her citadels, that you may tell the next generation
14 that this is God, our God forever and ever. He will guide us forever.
Psalm 48:1-14

The glory of the city, which the Psalmist is describing, is not attributable to the city, but to God. The Psalmist draws on history where God miraculously protected the city and cause it to prosper. The Lord had called Jerusalem to be a light among the nations – not because of its buildings and landscape, but because of its obedience to God and His laws.

“I am the LORD; I have called you in righteousness;
I will take you by the hand and keep you;
I will give you as a covenant for the people,
a light for the nations”
Isaiah 42:6

The same God who promised to be the light and glory of Israel, also warned that if they disobeyed and walked away from Him, they would no longer enjoy this privileged position (see Zech. 11:10). Prophet after prophet were sent to them, and yet they stubbornly rebelled against God and His Law. The ultimate expression of this was when Christ declared Jerusalem’s destruction and desolation.

You shall say, ‘Hear the word of the LORD, O kings of Judah and inhabitants of Jerusalem. Thus says the LORD of hosts, the God of Israel: Behold, I am bringing such disaster upon this place that the ears of everyone who hears of it will tingle.
Jeremiah 19:3

¶ “O Jerusalem, Jerusalem, the city that kills the prophets and stones those who are sent to it! How often would I have gathered your children together as a hen gathers her brood under her wings, and you were not willing! See, your house is left to you desolate.
Matthew 23:37-38

The Zechariah passage was written as the Jews were returning from exile. It is full of prophetic encouragement. At the time of its writing, not all of the remnant of the Jews who had been exiled had returned to what was left of the land of Israel. Zechariah prophesied that there would be more Jews to return (Zech. 10:6). Rather than speaking of the future glory of Jerusalem, it declares the Messiah’s glory and the wonders of the New Covenant He would establish, not just with Jews, but with people from all nations. It declared that God was ending the Mosaic Covenant, and the favoured place of Israel.

And I took my staff Favor, and I broke it, annulling the covenant that I had made with all the peoples. So it was annulled on that day, and the sheep traders, who were watching me, knew that it was the word of the LORD. Then I said to them, “If it seems good to you, give me my wages; but if not, keep them.” And they weighed out as my wages thirty pieces of silver. Then the LORD said to me, “Throw it to the potter”—the lordly price at which I was priced by them. So I took the thirty pieces of silver and threw them into the house of the LORD, to the potter. Then I broke my second staff Union, annulling the brotherhood between Judah and Israel.
Zechariah 11:10-14

The Zechariah passage above should be recognisable as being about the Messiah – not Donald Trump!

The second test I suggested was the time-frame-fulfilment test. If you are reading this after the Presidency of Donald Trump, and none of the claimed predictions of Baxter or Begley have happened within President Trump’s term in office, you already know that the predictions made by these gentlemen has been proven wrong. At the time writing this though, President Trump is only mid-term after his first election win. This kind of test then only requires two or six years to be tested. I am confident that even if someone rejected my counter-understanding of the Scriptures they have offered, they should at least be persuaded by this time-test.

EXEGESIS RATHER THAN GUESSWORK

What Mr Irving and Mr Begley are doing is starting with today’s newspaper and looking for prophetic Scriptures to impose their speculation into. This is called eisegesis. What Biblical scholars do on the other hand, is start with the Scriptures and then identify their intended meaning. This is called exegesis. When it comes to the genre of Biblical prophecy, this identification process starts in history, not the newspaper. For example, every prophecy of Jews being returned to their land was given either before or during their exile to Babylon which culminated in the events of 586BC when Nebuchadnezzar was used as God’s instrument of coming judgment upon Jerusalem in which the entire city was destroyed.

¶ “For thus says the LORD: When seventy years are completed for Babylon, I will visit you, and I will fulfill to you my promise and bring you back to this place.
Jeremiah 29:10

There is a better way to treat the prophecies of the Bible that actually increases their credibility rather than diminishes it. I believe I have done this in my eBook, The Most Embarrassing Book In The Bible – Understanding The Book of Revelation. If you’re a subscriber to my FTM Perspectives email, you will find a 15% Off Coupon offer in the latest edition. I invite you to have a read and then weigh up who makes the stronger case from the Scriptures that both time and history are being directed by the Lord.