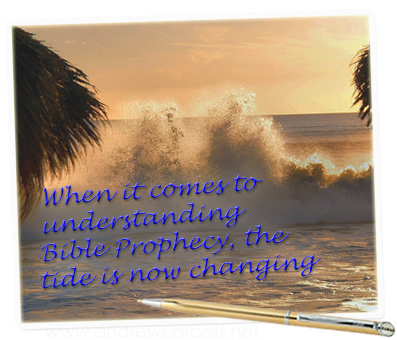 I was enjoying a meal with a pastor during a recent interstate ministry trip when he then asked me about my understanding of Bible Prophecy.

“I see from your website that you’ve written quite a bit about it” he said.

“Yes I have” I replied, “but what’s your position first?”

To which he responded, “I take the traditional orthodox position.”

I remember as a young boy going to church on a Sunday evening and hearing the Bible Prophecy teacher give his end-times-chart-on-the-bedsheet-on-the-wall talk and feeling both excited and scared. “Excited” because it was reassuring to hear how accurate the Bible was in matching prophecy with history. “Scared” because the Bible apparently said that the ‘last days’ were going to be hell-on-earth! I was taught that the USSR was the bear of Ezekiel and also described as Gog and Magog. I was told that the Anti-christ was alive today in America and already plotting his world take-over. I heard that a time of Great Tribulation was coming on the earth to punish Israel for rejecting their Messiah and forming an alliance with the Anti-christ who will eventually rebuild Solomon’s Temple in Jerusalem. This would all lead to the battle of Armageddon where millions of people would be killed in the mother of all battles. But most evangelistically I was told that I could escape this coming doom by committing my life to Christ and therefore qualify for being ‘raptured’ just before this final seven year period began.

That was all some thirty years ago. Since that time Dispensationalism has reached its peak with the Left Behind phenomenon. Its new champions include Tim LaHaye, John Hagee, Kenneth Copeland, Jack Van Impe. Almost without exception, all of the predictions these teachers have made (based on their Dispensational interpretation of Bible prophecy) have not only not come true, at times the degree to which they have been wrong has been dangerously alarming. Who could forget the avalanche of supposed Bible Prophecies these teachers promoted that predicted the total collapse of the world banking and airline systems with the Y2K bug?! I have detailed some more of these faulty predictions in another article. But the exposure of this faulty method of interpreting the Bible and Bible prophecy has not only embarrassed Dispensationalism, it has hastened its inevitable demise!

Many Christians have been quick to realise the inadequacies of Dispensationalism but have not known what to replace it with. This vacuum has increasingly been filled by Preterism (from the Latin word ‘praeter’ which means the past). There are two types of Preterism. The first is Full Preterism (also known as ‘Hyper’ Preterism or Pantelogy) which regards all Bible prophecy is fulfilled. The other is Partial Preterism (also known as ‘Classical’ Preterism) which regards most Bible prophecy fulfilled – except the return of Christ, the Resurrection, Final Judgment, and the New Heaven and Earth. Partial Preterism agrees with ancient Creeds of the Church while Dispensationalism and Full Preterism do not. The difference between Full Preterism and Classical Preterism is explored in more detail [here]. Some very respected Bible teachers have adopted the Partial Preterist position. These include: Dr. R.C. Sproul, Steve Griegg, and Hank Hanegraaff. One of the best cases for the Partial Preterist position is the eBook- The Most Embarrassing Book In The Bible which can be immediately downloaded to your computer and read off your screen or printed out.