The Bible is unique among the religious books of the world partly because it is structured around a story which has a beginning, a plot, a climax and an end; and partly because this story is also a love story. Its lead character, God, is its hero. He takes a bride. His bride flourishes. Tragically, she wanders from her husband into adultery and then harlotry. Her husband pleads with her for her to return to Him. She refuses. He is left with no option but to divorce her. But the story does not end there. 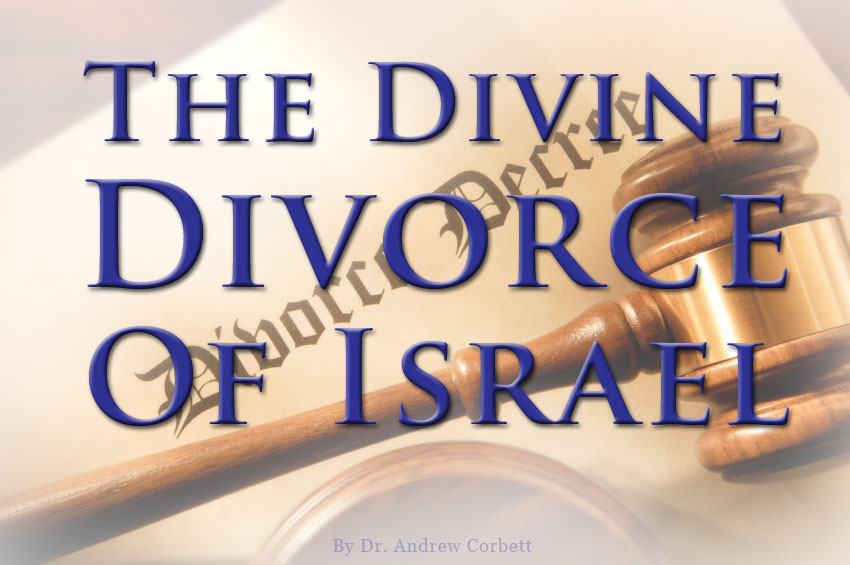 She saw that for all the adulteries of that faithless one, Israel, I had sent her away with a decree of divorce. Yet her treacherous sister Judah did not fear, but she too went and played the whore.
Jeremiah 3:8

The Bible’s story opens with a marriage in Genesis chapter 2. From the outset, marriage is presented as the highest and closest union between a man and woman and was always intended to reflect the intimacy within the Godhead. As such, this unique relationship is identified as a covenant. This is the type of relationship which God also ascribes to His relationship with Israel. As the Scriptures unfold, we see that God thus describes Himself as a husband to Israel (Jer. 31:32).

For your Maker is your husband,
the LORD of hosts is His name;
and the Holy One of Israel is your Redeemer,
the God of the whole earth He is called.
Isaiah 54:5

Ezekiel describes this marriage in a metaphorical story of God taking these Hebrews and bestowing magnificence upon them.

I clothed you also with embroidered cloth and shod you with fine leather. I wrapped you in fine linen and covered you with silk.  And I adorned you with ornaments and put bracelets on your wrists and a chain on your neck.  And I put a ring on your nose and earrings in your ears and a beautiful crown on your head.  Thus you were adorned with gold and silver, and your clothing was of fine linen and silk and embroidered cloth. You ate fine flour and honey and oil. You grew exceedingly beautiful and advanced to royalty.
Ezekiel 16:10-13

When the nation of Israel suffered a political division which divided them between north and south with ten tribes to the north being known as Israel (or Ephraim, or identified by its capital: Samaria) and the remaining two tribes in the south (Judah and Benjamin) being known as Judah (often identified by its capital: Jerusalem). From this point, God’s relationship with the Hebrews was then described as being married two sisters.

Oholah was the name of the elder and Oholibah the name of her sister. They became mine, and they bore sons and daughters. As for their names, Oholah is Samaria, and Oholibah is Jerusalem.
Ezekiel 23:4

God gave Israel laws regulating the practice of divorce in Deuteronomy 24. Prior to this, a man could verbally divorce his wife and virtually confine her to a lifetime of impoverishment.

There are two particularly important things to note about these regulations. Firstly, the divorce had to be a written document. Secondly, the husband divorcing his wife could not remarry her. Jesus Christ elaborated on this and stated that if a man divorced his wife and married another while his former was still alive, he was committing adultery. And if the wife he had just divorced was to marry another, he would be causing her to commit adultery.

And I say to you, whoever divorces his wife, except for sexual immorality, and marries another, commits adultery; and whoever marries her who is divorced commits adultery.”
Matthew 19:9 NKJV

And the next generation, your children who rise up after you, and the foreigner who comes from a far land, will say, when they see the afflictions of that land and the sicknesses with which the LORD has made it sick— the whole land burned out with brimstone and salt, nothing sown and nothing growing, where no plant can sprout, an overthrow like that of Sodom and Gomorrah, Admah, and Zeboiim, which the LORD overthrew in his anger and wrath—all the nations will say, ‘Why has the LORD done thus to this land? What caused the heat of this great anger?’ Then people will say, ‘It is because they abandoned the covenant of the LORD, the God of their fathers, which he made with them when he brought them out of the land of Egypt, and went and served other gods and worshiped them, gods whom they had not known and whom he had not allotted to them. Therefore the anger of the LORD was kindled against this land, bringing upon it all the curses written in this book, and the LORD uprooted them from their land in anger and fury and great wrath, and cast them into another land, as they are this day.’
Deuteronomy 29:22-28

When Israel abandoned the Lord, God sent them prophets who each reminded them of their Covenant with God. These prophets to the Northern Kingdom of Israel included: Hosea, Amos, Joel, and Jonah. If, as Jeremiah declared, God had given Israel a written decree of divorce, chances are it was penned by at least one of these prophets. What we cannot be as certain about is whether there is a Canonical (Scriptural) record of this decree. In Second Kings 17 there is a reference to prophets giving this prophetic decree to Israel without including the precise retelling of its wording or naming any particular prophet.

until the LORD removed Israel out of his sight, as He had spoken by all His servants the prophets. So Israel was exiled from their own land to Assyria until this day.
Second Kings 17:23

Initially it appears that the book of Hosea is the most likely candidate. Support for this candidature includes its historical context.

(i) It was written before Israel was exiled to Assyria.

(ii) It metaphorically pictures Israel’s marriage to God and their adulterous unfaithfulness.

(iii) It foretells of a coming new covenant, which would involve God taking a new bride. But in order for this to happen in accord with what Christ said about divorce and remarriage, one of the parties would have to die. This will be discussed shortly.

Divorce involved the sending away of the divorced wife. When Abraham divorced Hagar, it necessarily involved sending her away (Gen. 21:14). In Israel’s case, this was carried out by the Assyrians who took them into exile.

¶ In the ninth year of Hoshea, the king of Assyria captured Samaria, and he carried the Israelites away to Assyria and placed them in Halah, and on the Habor, the river of Gozan, and in the cities of the Medes.
Second Kings 17:6

The Southern Kingdom of Judah faced the same threat from the Assyrians, but unlike their northern sister, they turned to the Lord.

Do not let Hezekiah make you trust in the LORD by saying, The LORD will surely deliver us, and this city will not be given into the hand of the king of Assyria.’ …  ¶ Then Isaiah the son of Amoz sent to Hezekiah, saying, “Thus says the LORD, the God of Israel: Your prayer to me about Sennacherib king of Assyria I have heard … ¶ “Therefore thus says the LORD concerning the king of Assyria: He shall not come into this city or shoot an arrow there, or come before it with a shield or cast up a siege mound against it.
Second Kings 18:30; 19:20, 32

But eventually, despite the Prophet Jeremiah’s pleading, Judah also abandoned the Lord and committed spiritual adultery with idols. This eventually led to them also being divorced from the Lord.

Surely, as a treacherous wife leaves her husband, so have you been treacherous to me, O house of Israel, declares the LORD.’”
Jeremiah 3:20

The New Covenant was foretold by the prophets, particularly Jeremiah. It depicted a remnant of the twelve tribes of Israel being reunited under a new covenant.

In those days the house of Judah shall join the house of Israel, and together they shall come from the land of the north to the land that I gave your fathers for a heritage.
Jeremiah 3:18

Based on the prophecies in the Book of Hosea, the New Covenant was to encompass those who were not ethnically Hebrew who were depicted with the common Old Testament metaphor for Gentiles of ‘beasts’.

And I will make for them a covenant on that day with the beasts of the field, the birds of the heavens, and the creeping things of the ground. And I will abolish the bow, the sword, and war from the land, and I will make you lie down in safety.
Hosea 2:18

But in order for this to happen in accord with what Christ said was permissible, one of the previously divorced parties would have to be dead. This was fulfilled with the death of God The Son. By understanding this and recognising that God has now taken a new bride (as prophesied in the Old Testament) – namely, the Church (referred to as “the true Israel” cf. Gal. 6:16) – we can begin to understand that the closing book of the Bible, The Revelation, is the legal divorce papers of Israel and the announcement of God’s having taken a new bride.

¶ “ ‘I know your tribulation and your poverty (but you are rich) and the slander of those who say that they are Jews and are not, but are a synagogue of Satan.
Revelation 2:9

The implications of appreciating this issue are dramatic. Rather than persisting with the Dispensational notion that God has two People who are redeemed under two concurrent and equally salvific covenants, the Scriptures declare –

¶ In speaking of a new covenant, He makes the first one obsolete. And what is becoming obsolete and growing old is ready to vanish away.
Hebrews 8:13 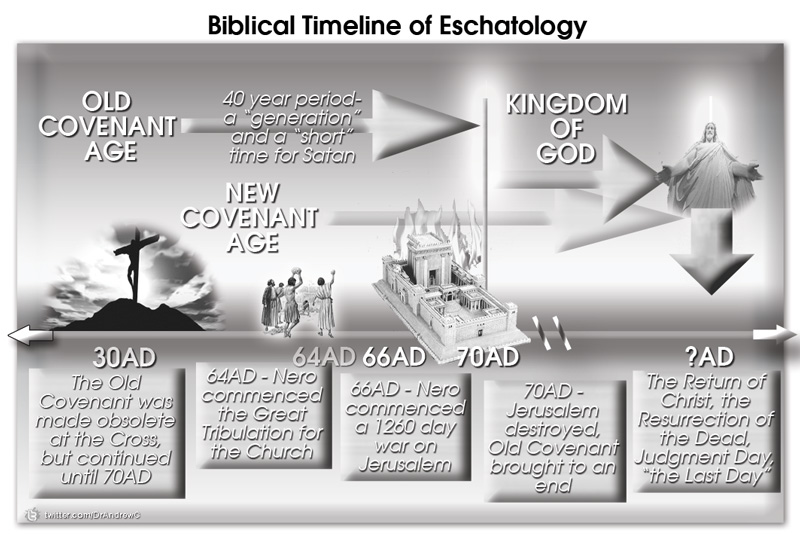 The Bible is unique among the religious books of the world partly because it is structured around a story which has a beginning, a plot, a climax and an end; and partly because this story is also a love story. Its lead character, God, is its hero. He takes a new bride. His bride flourishes and encompasses a multitude of people from every nation, tribe and tongue, so vast that no-one could number!

¶ After this I looked, and behold, a great multitude that no one could number, from every nation, from all tribes and peoples and languages, standing before the throne and before the Lamb, clothed in white robes, with palm branches in their hands, and crying out with a loud voice, “Salvation belongs to our God who sits on the throne, and to the Lamb!”
Revelation 7:9-10