home > articles > How The Book of Revelation Can Deepen our Devotion To God,
Written by Dr Andrew Corbett, President of ICI Theological College Australia, and author of the popular commentary on the Book of Revelation- The Most Embarrassing Book In The Bible, August 1st 2012

In 2012 I completed a project for the Bible Society in Australia where I wrote a 30 Day Devotional on the Book of Revelation. (This project will be published daily online through October 2012.) If I was to write “Day 31” it would probably sound familiar to this…

“And the twelve gates were twelve pearls, each of the gates made of a single pearl, and the street of the city was pure gold, like transparent glass.”
Revelation 21:21

I have spent the past decade or so writing about the fascinating details of the Book of Revelation. In my eBook, I have given an explanation of the broad message of Revelation which has prompted thousands of readers around the world to write to me with expressions of gratitude. I have laboured the precise manner in which the prophecies within the Book have been fulfilled and why this gives us the confidence that the remaining prophecies will similarly be fulfilled just as precisely. But not until recently have turned my attention to treating the Book of Revelation as a source of deepening spiritual devotion to Christ.

My extreme hesitancy with embarking on this course has been spurred by my desire to ground my treatment of the Apocalypse in rigorous exegesis rather than merely dismissing it (in the way many do) and resort to reducing it merely to a Biblically disconnected allegory. Any Biblical devotional must be true to the intent of the Sacred writ. One of the errors of the Ante-Nicene Church was their tendency to allegorise the Scriptures rather than exegete the Scriptures. To allegorise a text is to give meaning to words and elements within a story that almost certainly was not intended by the author. 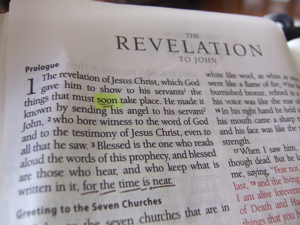 Many Biblical devotionals do not start with exegeting a text. This is sometimes justified with the fanciful notion that a Biblical passage can legitimately have multiple interpretations. But it is generally acknowledged in the field of Hermeneutics that one of the guiding principles is that the Bible has one intended meaning (which is the goal of interpretation) and multiple applications (which is the goal of devotionalism). Of all the devotional commentators of the Bible, Matthew Henry is probably the most renowned. He wrote a devotional commentary on nearly every book of the Bible. What makes Matthew Henry’s comments so valuable is that he had a better than average exegetical understanding of the text he was sharing his devotional thoughts on. The other value of his commentary is that it reveals how the Puritans approached the Text in the light of Papal apostasies. This is particularly apparent with his comments about the Book of Revelation. For example, his comments on Revelation 17 (which describes the “Harlot of Babylon”) contains references to “Papal Rome” and “the Papacy”. Matthew Henry the Exegete knew better than this, but Matthew Henry the Puritan Presbyterian Pastor was committed to the established idea that the Bible prophetically warned of the looming evils of the Papacy. (I explain in my eBook how Revelation 17 should be best interpretted exegetically.)

having the glory of God, its radiance like a most rare jewel, like a jasper, clear as crystal.
Rev. 21:11

Thus, when I wrote my Devotional on the Book of Revelation, I was not attempting to say this means… but rather: from this text we… By starting with exegesis we have a greater likelihood of capturing the intended application of a text – and it strikes me that the Book of Revelation was intended to have some very obvious applications. This method of drawing out a devotional application from a Biblical text is precisely what Pastoral Preachers dedicate their pulpits to. Our job as pastors is not merely to inform (explain what the text says), it is also to illumine (bring to light details not immediately obvious) and inspire (move hearers to apply the text to their walk with Christ through life).

My Devotional on the Book of Revelation will be over 30 days and cover chapters 1 to 20. But if I were to write Day 31, it would be based on Revelation 21. I would draw the readers’ attention to the New Jerusalem with the foundation of rare (“most precious”) jewels. Jewels, the Apostle Paul tells us in First Corinthians 3:12 speaks of those works done for God which can endure the fire of testing. The original audience of The Book of Revelation were indeed being severely tested with persecution. God promises those who endure testing persecution and continue to serve God, that they will be honoured with admission into eternal bliss. The Bible uses the word ‘precious’ to describe not only these enduring works in the midst of persecution, but also to describe our faith (1Peter 1:7), the blood of Christ (1Peter 1:19), Christ our Cornerstone (1Peter 2:6), and the promises of God (2Peter 1:4). By holding onto these precious jewels through continuing to serve God in the midst of trials and persecution we demonstrate that the grace of God is having its affect in our lives and we are to be reminded of God’s glorious destiny for us: a city whose foundation is precious jewels.

This City of Destiny is paved with gold. One of the unique traits of gold is that it never rusts or corrodes. It cannot be stained. This City can not be defiled. Those who walk upon it’s streets have chosen to walk in purity – undefiled from the world.

The gates of this City are pearl. A pearl is a creature which has experienced the pain of grit getting into where it is most sensitive. The oyster secretes a liquid which crystallises around the painful grit which eventually becomes the pearl. In a similar way, the believer who endures pain for the Kingdom and has learned to secrete worship of God is to be reminded that there is a City whose gates are made of “pearl” awaiting them. The New Testament teaches that the Kingdom of God must entered through suffering (Romans 8:17; 2Thess. 1:5) and even persecution (2Tim. 3:12). The pearls of Revelation 21’s City, proclaim afresh to the believer that our of great pain and trial can come great glory.

Romans 8:18 ¶ For I consider that the sufferings of this present time are not worth comparing with the glory that is to be revealed to us.

From this passage of the Book of Revelation we see that it was calling its original audience to a greater devotion to Christ leading to an encouragement to endure hardship for Christ’s glory. Written to a church under intense persecution these divinely inspired words would have brought great comfort to its readers. It should do no less for readers today.