home > About The Most Embarrassing Book In The Bible

At Last- An easier way to understand the Book of Revelation!

What people are saying about Dr. Andrew Corbett’s eBook- The Most Embarrassing Book In The Bible…

“Thank you for sharing what God has revealed to you with the rest of us – in courage!”
Michelle, Washington, USA, April 2008

“Glad to have your more Biblical perspective … There’s no doubt we need more considered reflection on what the Bible actually says on future events. I have held an historicist position since 1950, which Pastor Kelso Glover and Pastor C.L. Greenwood taught. However, I see the Partial Preterist view and lean toward it now. My appreciation for your book on The Revelation.”

Ps. George Forbes,
Retired Director of World Missions of the Assemblies of God in Australia

“One of the best, if not the best, explanation of the Book of Revelation I’ve ever read!”
Dr. Trevor Chandler, Chairman Emeritus of Christian Life Churches International (now the Acts 2 Alliance), Queensland Australia

Watch – Understand The Book of Revelation from Dr Andrew Corbett on Vimeo. 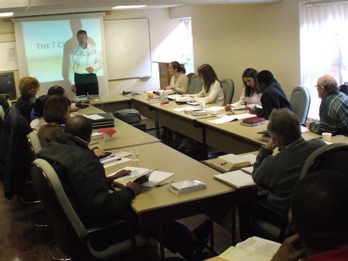 Yes I now believe the preterist viewpoint. I come from a Pre-trib Pre-mill Dispensationalist background and I am SOOOOOOOOOO happy to have discovered this theory of eschatology. I don’t know how anyone could EVER believe Dispensationalism ! It is what I now call, TRAIN-WRECK theology.
I appreciate your work. At least someone is out there fighting the good fight of biblical truths.
K.H. (Atlanta, Georgia)

I found this singularly helpful- in fact inspiring and excitingly stimulating to my faith…I’ve devoured this thing this afternoon! Thanks for the privilege.

Dr. Andrew Corbett’s, “Understanding the Book of Revelation”, will not suit those Christians who simply want to have a “pop” version of end times teaching to reinforce existing beliefs about a 7-year tribulation on earth while the people of God rest in heaven, or about an earthly reign of Christ for a thousand years following his return. Neither will this suit those who recoil in dismay and disapproval when challenged about their contention that the nation of Israel plays, and will play, a major role in the fulfilment of Bible prophecy.
Rev. Charles Schwab, Apostolic Church, Victoria, Australia

Got the revelation series today, half way through and you continue to bless me, I have plenty more copies of those futurist books from the 70’s if your running low, Got the Reese chronological bible too.
Have you got a different God in Tassie or does the cold keep Him awake down there. I suppose I’m trying to say I’m blessed by your common sense approach and I love not having the mental and spiritual challenge of “where or how did he come up with that?”
Paul, Wagga Wagga, NSW

In this eBook you’ll discover how the most common interpretation of the Book of Revelation among Western Christians was unheard of before 1835!

READ A PREVIEW OF THE FIRST CHAPTER OF THIS BOOK

CHANGING IS HARD TO DO! BUT…

Someone has once said that the only person who likes change is a baby with a wet nappy (“diaper”)! Even when challenged with convincing evidence that contradicts a person’s ideas some people still refuse to change their minds. Many scholars, pastors, and Bible teachers have reviewed my commentary on the Book of Revelation (“The Most Embarrassing Book In The Bible“) and provided very helpful feedback and suggestions which have helped me to refine the research even further. One very experienced Bible Teacher said that he enjoyed it very much but didn’t agree with it – but couldn’t say why! When gently pressed, he said that he was “too old to change his views now”!

More recently, the Principal of a major international Bible College debated with Dr. Corbett about his Revelation commentary for several months. Not only was this commentary a major challenge to the eschatological position of the College, but since the College is also the principle training arm for its several thousand churches- it proved to be a challenge to their entire denominational doctrinal position. But rather than digging their heels in and clinging to faulty doctrines merely because of their heritage, they announced a change of doctrinal position from a mix of dispensationalism and historicism to align with the tenor of Dr Corbett’s The Most Embarrassing Book In The Bible.

In March 2006 Dr Corbett lectured in the United Kingdom on the contents of his commentaries on Revelation and The Olivet Discourse (“The Most Embarrassing Verse In The Bible“) and their implications for Christians today. This included several TV interviews and two radio interviews.

Yesterday after downloading, I read “The Most Embarrassing Book In The Bible” and my spirit has not stopped leaping for Joy inside of me!!
I’ve had these questions since I’ve been able to read Revelation, about 8 yrs old…but I kept getting the same answers from everyone… that it was over my head and that someday God would reveal the truth to me….well I am now 46 and I believe that He gave me the answer for all of my doubts.
Thank you for going against the tide and and writing, what I believe with all of my being, is the truth!
V.E., Douglasville, Georgia, USA

Written in a simple, straight forward, yet well researched fashion, this eBook unfolds the message of Revelation in a way that will give you confidence in the inspiration of Scripture, and hope for the future as the world increasingly comes to know Christ as Lord.

CAN’T THERE LEGITIMATELY BE MULTIPLE INTERPRETATIONS OF REVELATION?

The Bible was not written as an interpretative multiple-choice document. When God communicated His inspired Word to mankind He was very intentional and deliberate. If we accept the liberal idea that we give God’s Word its meaning, it loses its divine meaning and therefore any real meaning at all!

Ultimately the Scriptures are intended to mean something. It’s our job to discover what that something is. Once we have done this we are able to apply it to our lives and world. Therefore, there is one interpretation of Scripture but many possible applications. The task of interpreting is called “exegesis”.

“Exegetical” means to “draw out” of the text its true meaning. This commentary is an exegetical analysis of the Book of Revelation. It is not an attempt to promote any particular view- but to arrive at the intended meaning of the text. In this sense it is a sincere attempt to achieve the “literal” interpretation of the text.

There are many people who claim they are taking a literal approach to interpretting the Book of Revelation, when in fact they are not. For example, the opening verse of Revelation contains a word which many people claim means exactly the opposite of what it literally says-

The Revelation of Jesus Christ, which God gave Him to show His servants—things which must shortly take place. And He sent and signified it by His angel to His servant John,
Revelation 1:1

In the literal sense, “shortly” means shortly, not two millennia off! This extremely clear time-frame reference for the bulk of Revelation to be fulfilled is consistent throughout Revelation with such expressions as-

…and who keep what is written in it, for the time is near.
Revelation 1:3

And he said to me, “Do not seal up the words of the prophecy of this book, for the time is near.”
Revelation 22:10

Then he said to me, “These words are faithful and true.” And the Lord God of the holy prophets sent His angel to show His servants the things which must shortly take place.
Revelation 22:6

Those who will be challenged by the contents of this eBook may be tempted to think, Yes these things may have been fulfilled, but they will be fulfilled again. Some claim that Christ and this Revelation spoke of near/at-hand events using “final consummation” language. But this reasoning (sometimes referred to as ‘Double Referencing’, or, ‘Dual Fulfilment’) simply falls into the trap of believing that Scripture can have multiple interpretations.

This eBook discusses why God had one thing in mind when He communicated this Revelation to John.

Once you have completed the transaction you will be directed to the download site and you are then able to print this eBook off, read it from your computer screen, pda, or eBook Reader at anytime.

Dr Corbett introduces the Book of Revelation by showing that despite the massive amount of speculation regarding its contents, there are some basic principles of hermeneutics (Bible interpretation) which are used for every other book of the Bible which can not be discarded when it comes to understanding Revelation.

ORDER THIS eBOOK NOW from our Shop
(Secure Paypal transaction)

In the past 12 months thousands of people have downloaded this exciting eBook from all around the globe who have come to see the wonders of this Revelation!

Written in a simple, straight forward, yet well researched fashion, this eBook unfolds the message of Revelation in a way that will give you confidence in the inspiration of Scripture, and hope for the future as the world increasingly comes to know Christ as Lord.

This, and other such issues, is dealt with more fully in the downloadable ebook on the Book of Revelation- The Most Embarrassing Book In The Bible.

Download the eBook- “The Most Embarrassing Book In The Bible”