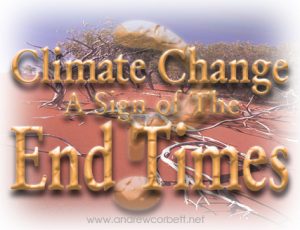 It seems that the Christian response to the claim of rapid climate change is polarised between the extremes of outright denial on the one hand and apocalyptic alarm on the other. And these responses often have more to do with theological biases rather than real science…

There are a large number of Evangelical Christians who simply reject the claim that the Globe is unusually warming. Their denials often downplay the cries of scientists alarmed about the current global warming trends. These Christians scoff at such alarmism and dismiss these weather patterns as merely normal cyclical trends that have carried on this way for centuries if not millennia.

Already there a groups within the Evangelical Community who are widely publishing books and DVDs to counter the idea of global warming by claiming that the data used by scientists is built entirely upon a false premise (which we’ll examine later).

On the other hand there are some Christians who are acknowledge that what we call Global Warming is no mere cyclical event. They recognise that the earth has never before experienced such rapid warming. They share the concern of Environmental Scientists who claim that the Earth is rapidly warming – that is, it’s still going to get a lot, lot hotter. This will cause much of the polar ice-caps to melt resulting in massive sea-level rise (currently about 3mm a year but expected to be about 5-6mm a year within the next 10 years). This means that several South Pacific Island nations, such as the Marshall Islands, shall be wiped out within 20 years since they are less than 2 metres above sea level! Great chunks of Chinese, American, and European coastlines will become uninhabitable, if not completely destroyed, if the current predicted trends continue. And for Christians disposed toward an apocalyptic outlook for the future all of this is just the earth’s destiny.

“DO NOTHING!” THE CRY FROM BOTH GROUPS

As different as both groups are in their interpretation of these events, they actually share a common response: do nothing. Denialists argue that there’s nothing really to worry about so let’s just keep going the way we’re going. Apocalypticalists argue that it is entirely the hand of God bringing the world to an end and therefore we cannot and should not resist it.

WHEN THEOLOGY IS FAULTY

I recently watched a docudrama called Egypt in which there was a scene when a French Vatican representative opposed a piece of Egyptian artwork potentially being dated any older than 2439 B.C. by an expert into Egyptian artefacts, since that would contradict the Biblical account of the global flood destroying all of mankind. The fear was that experts would conclude that the artwork was made around 3000 B.C. I felt like screaming at the TV! Where in the Bible does it say that Noah’s flood occurred in 2439 B.C.? The answer is: no-where! But thanks to the faulty chronology devised by Bishop Ussher who incompetently calculated the age of the earth, the date of creation, the time of the Great Flood- all based entirely on his calculations of the genealogical accounts within Scripture, there are now millions of Christians who believe that the ridiculous dates proposed by Bishop Ussher are actually stated in the Bible. The most absurd date given by Ussher was 4004 B.C. as the date for the beginning of the world. This would mean that the earth was created to look ancient even though it was only created recently. Thus, when scientists claim that the earth is 3.8 billion years old, Denialist Christians, who sincerely believe that the Bible teaches that earth is “young” (around 6,000 years old), scoff at such ideas as contrary to God’s Word!

But Bishop Ussher blundered. He failed to calculate the genealogies accurately or compensate for the many generational omissions that Hebrew writers deliberately employed (the best example of this literary style is Matthew chapter 1). Therefore, while Bishop Ussher inaccurately assumed that he could calculate the age of the earth based on genealogies, he further miscalculated the age of mankind by his inept calculation of Biblical genealogies. It is quite plausible to arrive at a creation date for Adam within the range of 50,000 – 150,000 years ago based partly on a more accurate calculation of Biblical genealogical records. It is also quite plausible to assume that the earth was created long before God created Adam. It is far more probable that the days of Genesis 1 are “ages” or periods of time rather than 24 hour periods. This means that the earth could actually be 3.8 billion years old based on the Biblical record. If this is the case, Denialists should reconsider the basis of their denying the trends that scientists claim are based on hundreds of thousands of years of weather patterns and consider that this is a rather unusual weather pattern that the globe is experiencing.

I’ve just returned from stretching my slightly atrophied legs. As I went to listen to the radio I heard a local talk-back radio caller describing the Christian response to Global warming. She said that Global Warming was a Biblical sign of the end of the world, and that Christians should know their Bibles better so as not to be caught up in the hysteria. This is the other pole of faulty theology resulting in Apocalypticalism.

Is Global Warming a “sign of the last days”? No. I was bemused to hear the absence of any Scriptural citation for this sincere lady’s claims. Put simply, the Bible makes no such claims about Global Warming being a sign of the last days. Any reference to Matthew 24 or the Book of Revelation needs to consider that Jesus gave a strict time-frame reference for when these would occur- and none of them pertain to our time! I present the reasons for this in my eBook- The Most Embarrassing Verse In The Bible.

HOW SHOULD CHRISTIANS RESPOND TO GLOBAL WARMING?

The Earth is not ours: it is the Lord’s (Psalm 24:1). But, the earth is ours to steward. Perhaps it’s difficult for people living in reasonably unpolluted areas of the world to appreciate just how serious atmospheric, geological, and water pollution has become in other parts of the world. It’s perhaps even easier to adopt the “not in my backyard – not my problem” approach when confronted with the choking air-pollution of Calcutta or Beijing, or the putrid water of Manila, or the growing soil salinity problem of rural Australia. This approach is like two survivors sitting in a life-boat in the middle of a vast ocean with one survivor pointing to the other end of the life-boat and laughing- “Ha ha, your end of the life-boat has just sprung a leak!”

Al Gore has come under much ridicule from some in the Christian community for his campaign to avert Global Warming. This is a shame. Most of those who are criticising him have not seen his docu-movie An Inconvenient Truth and have therefore not seen the heartfelt passion this man has for saving the planet from self-destruction, or the data upon which his concerns are based.

Christians don’t worship creation but we can make our care of creation an act of worship. Denialists and Apocalypticalists are both wrong. Denialists are wrong because Global Warming is happening and something should be done to avert it. Apocalypticalists are wrong because the Bible has not prophesied the doom of earth through Global Warming – therefore complacency is similarly unacceptable.

Al Gore makes the point that the Fossil Fuel industries are the major cause of Global Warming. He also points out that they have billions of dollars at stake in keeping it that way. The solutions to replacing these industries could well be remarkably simple and affordable. We have not yet really begun to explore how we harvest renewable energy from existing free resources without impacting the stability of the environment. Some suggest that the answers lie in solar, wind, sea-wave, and hydrogen technologies (nuclear power should be regarded as the worst possible replacement energy source to carbon-based fossil fuels). But there are other commentators who take issue with Vice-President Gore. They acknowledge that human activity is a major contributor to global warming, but that it is not the largest contributor. Therefore, they argue, broader ethical issues need to be considered before jeopardising the jobs and welfare of people unnecessarily in the pusuit of arresting global warming. Other critics of the former Vice-President are cynical about government moves to tax carbon emmissions. In Australia, Senator Barnaby Joyce (Leaders of the National Party in the Senate) said that a carbon-tax was akin to a “world-peace tax” – its sounds nice and hard to disagree with but had no real way of achieving its purpose. [Source]

While Global Warming is now generally accepted as occurring, the real question is: Is Global Warming the result of human activity alone (such as increased carbon emissions due to fossil-fuel consumption)? Or, is do rises in global carbon levels follow global warming? Professor Ian Plimer, Chair of Mining Geology at the University of Adelaide, says that global warming is a fact, but its cause is certainly not human.

Professor Plimer believes the IPCC has neglected historical evidence of past climate changes, which are recorded in the rocks.

“When we look at the history of climate changes, not one has been driven by carbon dioxide,” he says.

“Climate always changes, as do sea levels, as does life (on Earth) and we are living in times that are not extraordinary. The only way you can have the view that humans change climate is if you ignore history.”
Prof. Ian Plimer, News.com.au report.

Professor Plimer makes a very strong case in his book about global warming, Heaven and Earth – Global warming: the missing science. Dr Jay Wesley Richards of the Discovery Institute, makes a similar point to Professor Plimer. If these men are right, Christians at least should be sceptical about how responsible carbon-emissions are for global warming. Christians can, however, lead the way in being responsible stewards of God’s earth in a way that directs scarce resources to solving the most urgent crises facing the well-being of humankind. This at least includes clean drinking water for everyone on the planet, the eradication of malaria, free literacy and numeracy programs for every child on the planet and affordable housing.