The devastation throughout the coastlands of the Indian Ocean will no doubt have some Christian speculators appealing to either “the wrath of God” on “pagan” nations, or some fulfilment of Christ’s prophetic words in Matthew 24. But there is a dire problem with these two naive positions…

Christ taught that good things can happen to bad people, and bad things can happen to good people (Matthew 5:45). When devastation happens to people its cause should not be automatically assumed to be the wrath of God. Thank God that the response from the majority of Christians around the world to various global disasters is compassion, aid, and relief, not judgment and condemnation!

Secondly, Christ never did say there would be an “increase” in earthquakes and disasters in the “last days”. In Matthew 24 He simply stated that there would be earthquakes in various places, and that this would occur within the generation of His original audience –

Truly, I say to you, this generation will not pass away until all these things take place.
(Matthew 24:34)

Some have illogically twisted “this generation” to mean “that generation” or “this race”, which has been rejected by nearly all lexicographers (people who define words especially in this case, ancient Biblical words). It has been noted that exactly what Christ said would happen and when He said it would happen did happen. Gary DeMar (www.americanvision.org) notes –

Secular writers describing the period support the biblical record: “And as to earthquakes, many are mentioned by writers during a period just previous to 70 A.D. There were earthquakes in Crete, Smyrna, Miletus, Chios, Samos, Laodicea, Hierapolis, Colosse, Campania, Rome, and Judea. It is interesting to note that the city of Pompeii was much damaged by an earthquake occurring on February 5, A.D. 63″2 The number of earthquakes that were recorded during that first-century generation is staggering given the shortness of the time period. Josephus describes an earthquake in Judea of such magnitude “that the constitution of the universe was confounded for the destruction of men,”3 the same language that is being used to describe this most recent earthquake. He goes on to write that this earthquake was “no common” calamity, indicating that God Himself had brought it about for a special purpose. One commentator writes: “Perhaps no period in the world’s history has ever been so marked by these convulsions as that which intervenes between the Crucifixion and the destruction of Jerusalem.”4

3. Quoted in Thomas Scott, The Holy Bible Containing the Old and New Testaments, According to the Authorized Version; with Explanatory Notes, Practical Observations, and Copious Marginal References, 3 vols. (New York: Collins and Hannay, 1832), 3:108.

As Christians we do ourselves an untold injury when we adopt and spread either of these two positions (God’s wrath or God’s prophetic judgment). We are not primarily proclaimers of God’s wrath, but of His love and salvation for all people. Secondly, the “times and seasons are not for us to know” (Acts 1:7). Therefore, whenever Christians ignore this plain statement of Christ and pretend to know the times and seasons of God’s prophetic calendar, only to be proven wildly wrong, they injure the cause of the Gospel by confusing it with “the” Gospel by the world.

The best thing that Christians can do now is to pray for the survivors of this disaster and sow financial and other seed to their aid. That’s what the early church did in times of disaster known to them. That’s what our church has done.

IS THIS DISASTER & OTHERS GOD’S DEFENCE OF ISRAEL? 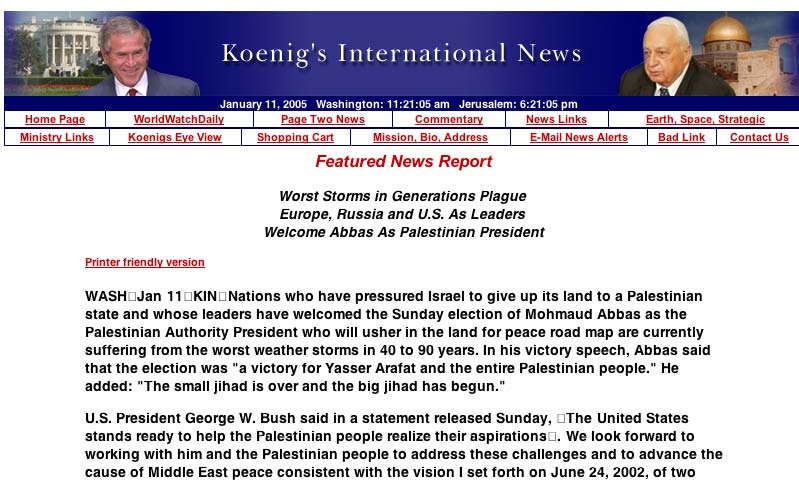 Some are even trying to claim that the Tsunami and the gale force winds which swept through Europe a week later were His wrath on these nations for their lack of support for Israel when they affirmed the recent Palestinian election win of Mr. Abas. Following this logic are we to attribute every natural disaster to how nations or people treat Israel? This somewhat deifies Israel which is blatant idolatry. Secondly it clearly ignores Christ’s prediction that within a generation of His original audience Israel’s House would be left to them desolate (Matthew 23:38). It also overlooks what Christ predicted about the vineyard being given to a people who will properly manage it (Matthew 21:41) which was a warning that if Israel rejected their Messiah the Kingdom would be given to Gentiles instead. Israel is not the centre of God’s prophetic scheme, Christ is (Jn 12:41)!

God is not the Author of vindictive wrath upon nations through natural disasters today. Things such as tsunamis and hurricanes are the outworking of the laws of nature. Without the movements of the tectonic plates we would not have our oceans. Without massive air movements we would have all kinds of environmental problems. Just as we have learned to live with other laws of nature such as the Law of Gravity (we’ve all fallen over and hurt ourselves) we must also learn to respect other laws of nature such as the movements of our lands, oceans and air.

During times when their is a tragic loss of life due to the natural outworking of nature Christians should be mobilised by compassion rather than ridiculously simplistic accusations of God’s wrath being poured out. After all, if we’re going to be consistent with this wrath-thinking then every time someone is harmed by gravity we would actually see God’s wrath poured out on them! This is really bad news for the average two year old!