home  >  articles  > Are We On The Brink of Armageddon? 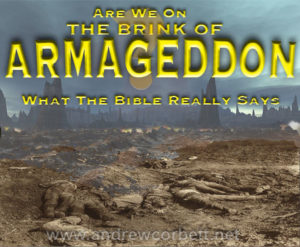 This is all very staggering considering that it occurs only once in Scripture, in the Book of Revelation, and is not alluded to anywhere else. Added to this is the clear and consistent message of Revelation to its original audience that this particular battle (which takes place in the middle section of the Book of Revelation—not the end!) was about to happen within their lifetime.

And he said to me, “Do not seal up the words of the prophecy of this book, for the time is near.
Revelation 22:10

To argue that the expression “the time is near” actually means that the time is not for another two thousand years or so is ludicrous. Therefore, before anyone assumes that Armageddon is still yet to happen, we would be better advised to investigate whether it has already been fulfilled since this is what Revelation told its original audience would happen.

Some people regard the book of Revelation as repeating the same vision of the end of the world told in several different apocalyptic visions. But this is an assumption that when scrutinised is found to be faulty. The visions of Revelation actually unfold in a very sequential order. I encourage readers to revisit the Book of Revelation and notice that within it there is an urgency and imminency up until chapter 20 when it then introduces a much greater time-frame: a thousand years. Biblically, the expression 1,000 means large number, not meant to be counted. For example-

If one wished to contend with him,
one could not answer him once in a thousand times.
Job 9:3

For every beast of the forest is mine,
the cattle on a thousand hills.
Psalm 50:10

For a day in your courts is better
than a thousand elsewhere.
I would rather be a doorkeeper in the house of my God
than dwell in the tents of wickedness.
Psalm 84:10

Therefore the reference in Revelation 20 to a thousand years is meant to correlate to a “long time” and the references prior to that which plainly state that the events of Revelation 1-19 were “near”, “at hand”, “now” obviously includes the one reference to Armageddon (Revelation 16:14).

ALL OF REVELATION 1 – 19 WAS FULFILLED IN THE FIRST CENTURY – AND HAD TO BE!

The case for all of Revelation 1 – 19 being fulfilled is made in my ebook on the Book of Revelation. An examination of first century shows that the events described in Revelation 16 were described by contemporary historians of the era, including Josephus. He describes the Roman catapults of a “talent weight” (100 pounds or 25 kilos) which rained down on the sieged city of Jerusalem during the 1260 day (42 month) siege against the Romans.

Josephus also makes references to the skirmishes and battles that took place during this time, which the expression “Armageddon” refers to. Far from this being an apocalyptic battle to end the world (something not stated in the Book of Revelation), it predicted events which were about to take place within months of its authorship.

THE PROBLEM OF HISTORICAL AND BIBLICAL ILLITERACY

In my eBook, The Most Embarrassing Book In The Bible (about the Book of Revelation) I make the case that most modern readers are unfamiliar with the events of the first century and how they fit into the Biblical message.  It’s worth noting that Christ also gave some clear time-frame references as to when His prophecies would be fulfilled- which fit with my prior statements about Revelation 1-19 being fulfilled.

When they persecute you in one town, flee to the next, for truly, I say to you, you will not have gone through all the towns of Israel before the Son of Man comes.
Matthew 10:23

Truly, I say to you, there are some standing here who will not taste death until they see the Son of Man coming in his kingdom.”
Matthew 16:28