home  >  articles  >  Dating the authorship of the Book of Revelation

DATING THE AUTHORSHIP OF REVELATION

It would be remiss of any serious student of Revelation not to at least do a cursory examination of the historical context to which Revelation is back-dropped. The first point of reference would have to be to determine when Revelation was written. Most scholars regard there being only two possible dates. Dr. Leon Morris explores this adequately in his Tyndale Commentary series volume on Revelation, and I recommend that this widely available commentary be read. In the case of most books of the Bible, determining the date of its authorship, while certainly important, is not necessarily crucial to its interpretation. But this is absolutely not the case with the Book of Revelation. Some tradition has up until recent times regarded the date Revelation’s authorship to be around A.D. 95. This has been based almost entirely on a misunderstanding of one vague statement by the second century Church Father, Irenaeus and the assumption that Caesar Domitian oversaw a campaign of persecution against and martyrdom of Christians around A.D. 95. But the latest research shows that Domitian did not orchestrate such a campaign. This seriously depletes the argument that John wrote this Apocalypse in A.D. 95.

The doctoral work by Kenneth L. Gentry on dating Revelation has concluded that it must have been written in the “mid to late 60s” rather than in A.D. 95-

There are suggestive evidences within the book to date it in the mid – to late 60s of the first century. In fact, the evidence is persuasive enough that it convinced such notable scholars Moses Stuart, F. J. A. Hort, B. F. Westcott, and F. W. Farrar in the 19th century, and J. A. T. Robinson, R. A. Torrey, Albert A. Bell, C. F. D. Moule, and R.C. Sproul, in the 20th century.

Two leading indicators of the early date are: (1) The “temple” in the “holy city” is still standing as John writes, though it is being threatened with devastation (Rev. 11: 1-2). We know as a matter of historical fact that the Jewish temple was destroyed in A.D. 70, and has never been rebuilt. (2) The sixth “king” is presently ruling from the “seven mountains” and will do so until a king comes who will reign a “short time” (Rev. 17:9-10). The Preterist takes this to be a clear enough allusion to Nero Caesar. According to the enumeration found in Josephus’ Antiquities (18:2:2,6, 10) and Suetonius’ Lives of the Twelve Caesars, Nero is Rome’s sixth King, following Julius Caesar, Augustus, Tiberius, Gaius, and Claudius. The next reigning emperor, Galba, reigned just six months, the shortest reigning emperor until that time.

What is it Iranaeus [supposedly] said about the date of Revelation? Actually, Iranaeus did not discuss the dating of the book at all. The relevant quote is about the identity of the beast of Revelation and is found in the work of Eusebius, 4th century church historian, Book 5, chapter 8. Eusebius says Iranaeus speaks about John :“We, therefore, do not venture to affirm anything with certainty respecting the name of antichrist. For were it necessary that his name should be clearly announced to the present age, it would have been declared by him who saw the revelation. For it has not been long since it was seen, but almost in our own generation, about the end of Domitian’s reign.”
Don K. Preston

THE ARGUMENTS FOR AN A.D. 95 AUTHORSHIP

The evidence for the Book of Revelation being written in A.D. 95 includes-

Irenaeus (A.D. 180), a student of Polycarp (who was a disciple of the apostle John), wrote that the apocalyptic vision “was seen not very long ago, almost in our own generation, at the close of the reign of Domitian” (Against Heresies 30). The testimony of Irenaeus, not far removed from the apostolic age, is first rate. He places the book near the end of Domitian’s reign, and that ruler died in A.D. 96. Irenaeus seems to be unaware of any other view for the date of the book of Revelation.

Clement of Alexandria (A.D. 155-215) says that John returned from the isle of Patmos “after the tyrant was dead” (Who Is the Rich Man? 42), and Eusebius, known as the “Father of Church History,” identifies the “tyrant” as Domitian (Ecclesiastical History III.23).

Even Moses Stuart, America’s most prominent preterist, admitted that the “tyrant here meant is probably Domitian.” Within this narrative, Clement further speaks of John as an “old man.” If Revelation was written prior to A.D. 70, it would scarcely seem appropriate to refer to John as an old man, since he would only have been in his early sixties at this time.

Victorinus (late third century), author of the earliest commentary on the book of Revelation, wrote:

When John said these things, he was in the island of Patmos, condemned to the mines by Caesar Domitian. There he saw the Apocalypse; and when at length grown old, he thought that he should receive his release by suffering; but Domitian being killed, he was liberated (Commentary on Revelation 10:11).

In the fourteenth then after Nero, Domitian having raised up a second persecution, he [John] was banished to the island of Patmos, and wrote the Apocalypse (Lives of Illustrious Men 9).

To all of this may be added the comment of Eusebius, who contends that the historical tradition of his time (A.D. 324) placed the writing of the Apocalypse at the close of Domitian’s reign (III.18). McClintock and Strong, in contending for the later date, declare that “there is no mention in any writer of the first three centuries of any other time or place” (1969, 1064). Upon the basis of this external evidence, it is therefore claimed that “there is little contest between the earlier and later dates.”

There are several problems though with these arguments. Firstly, Irenaeus did not say that John the apostle wrote the Apocalypse in the reign of Emperor Domitian, rather, he mentioned that John was seen (alive) during the reign of Emperor Domitian.  Clement of Alexandria did not identify Domitian as ‘the Tyrant’, rather, he refers to Caesar Nero as “the Tyrant.” Clement’s reference to the apostle John as ‘an old man’ must be understood in the context of first-century life-spans where someone in their 60s was considered old. The later references from the fourth century and beyond are based on a misunderstanding of what Irenaeus had written. Let’s now consider the case for a 65AD authorship of the Book of Revelation.

THE ARGUMENTS FOR THE A.D. 65 AUTHORSHIP

The external evidence for Revelation actually being written before A.D. 70 includes-

And to give you confidence, when you have thus truly repented, that there remains for you a trustworthy hope of salvation, hear a story that is no mere story, but a true account of John the apostle that has been handed down and preserved in memory. When after the death of the tyrant (previously identified as Nero) he removed from the island of Patmos to Ephesus, he used to journey by request to the neighboring districts of the Gentiles, in some places to appoint bishops, in others to regulate whole churches, in others to set among the clergy some one man, it may be, of those indicated by the Spirit.
(“Who is the Rich Man that shall be Saved?”, Section 42) 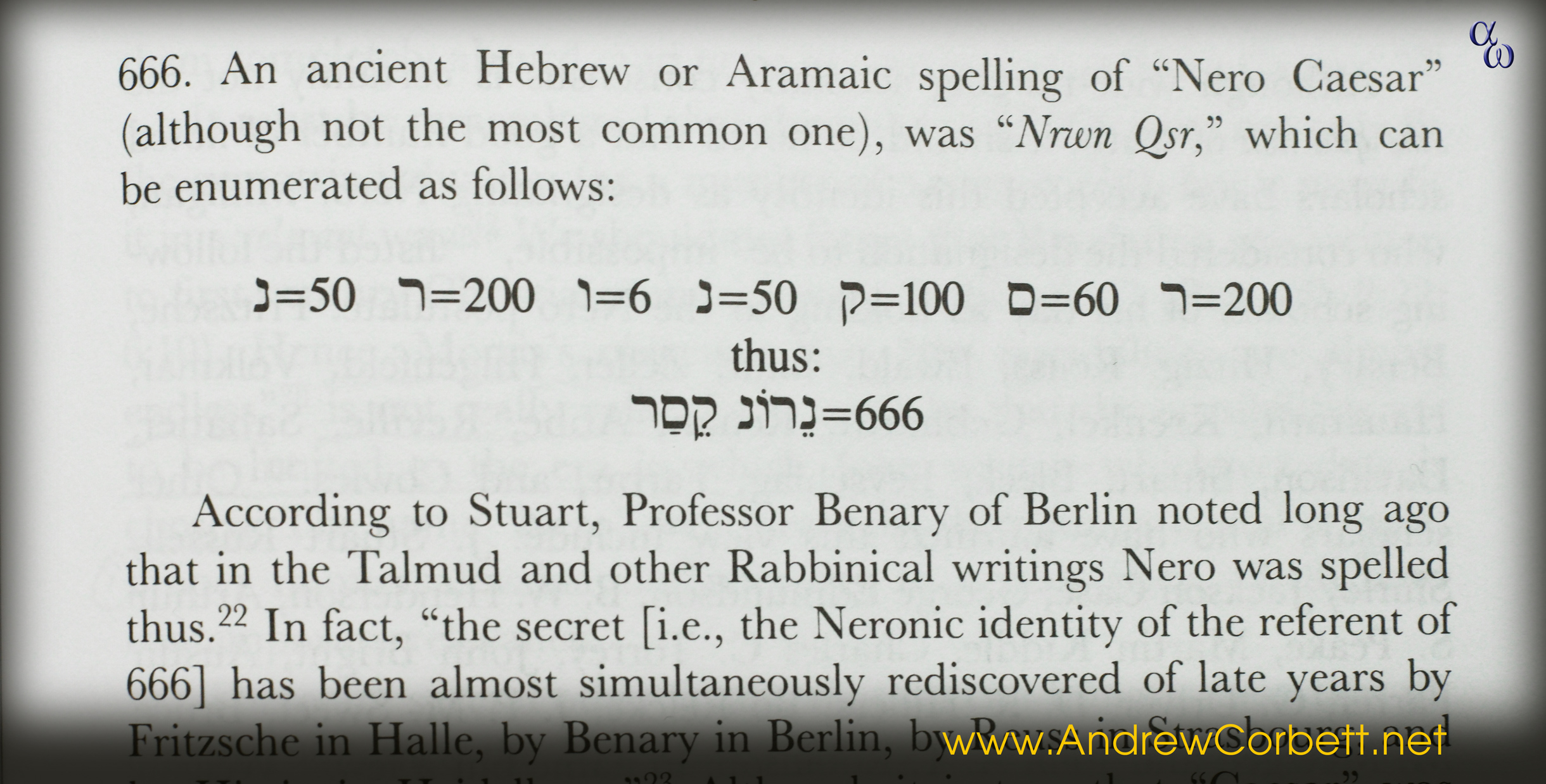 The expressions of nearness of the Lord’s coming within Revelation indicate that something was about to immediately happen. The notion that “imminent” doesn’t mean soon but rather anytime- and then quickly is somewhat ridiculous and a discredit to the several lexicons which have succumbed to this faulty reasoning. If Revelation was written in A.D. 95, what event happened within months or few years of its publication that could be seen as fulfilling the great sense of imminence contained within its pages? None. But if Revelation was written around A.D. 64 the question is easily answered by pointing to the great persecution which commenced in A.D. 64 and the campaign against Jerusalem which began in A.D. 68.

It is therefore my contention that Revelation 1-19 concerns events which were all fulfilled by A.D. 70 when Jerusalem was destroyed. There are good reasons to believe that these passages parallel Matthew 24. Revelation 20 then introduces a greater time period- “1,000” years, which simply means a long period of time. This parallels Matthew 25 where we find several long-time references (the Bridegroom was “delayed”, vs. 5; the Master went away “a long time”, vs 19). At the end of Revelation 20 a fire appears from heaven which delivers the godly. This is the physical return of Christ, which is also described in Second Thessalonians 1:7-8 as being “fire from heaven”.

Therefore, the entire concept promoted by the Left Behind series is built upon a ridiculous method of Biblical interpretation which places nearly all of the contents of Revelation into the yet-to-be-fulfilled category.

THE HISTORICAL CONTEXT OF REVELATION

It was a dark time for the Church. Since the death of Stephen in Acts 7, the Jewish Temple authorities had been waging a violent war against the Church. This continued up until the time of Jerusalem’s destruction in A.D. 70. Empire sanctioned persecution against the Church was being intensified since A.D. 64 when Nero had ordered Christians to be put to death (usually by beheading). He declared that everyone in the Empire must acknowledge that he was Lord and King. Christians were publicly humiliated, ostracised and martyred throughout the Empire by both Jews and the Romans as they refused to declare that Caesar was either their Lord or their King (titles they exclusively reserved for Christ) or that the Old Covenant had any hold on them. Added to this was the rise in false doctrine, an increase in spiritual routine and therefore a decline in authentic passionate love for Jesus.

The Lord reveals through John that the wave of persecution against the Church was driven by the Dragon, no longer would his initial readers be lulled into thinking that they were engaged in some mere politico-ideological war – but a life-and-death spiritual war.