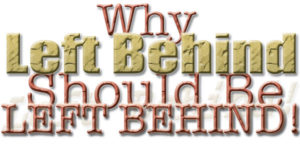 For LEFT BEHIND to be true it has to invent it’s own set of rules for Bible interpretation. What most LEFT BEHIND fans may be shocked to discover is that the pivotal sections of Matthew and Revelation upon which LEFT BEHIND is based was fulfilled by A.D. 70! And it had to be since that’s what Christ said!

The highly acclaimed atheist, Bertrand Russell, said this verse alone was enough to discredit both the Bible and Jesus Christ!

Like many evangelical Christians I was raised on a diet of End Times Prophecy. I was told that those who didn’t repent and accept Christ could find themselves in the most gruesome Great Tribulation where people would be randomly executed daily for not accepting “the silicon chip [mark] of the Beast.” The motivation for such a message was to encourage people to accept Christ before the highly imminent ‘rapture’.

But an examination of what the Bible says about the end times may surprise those who hold to the Dispensational view that God must remove the Church via a secret rapture, then allow a period of tribulation to commence to introduce an “Anti-Christ” who will set himself up in the Third Temple in Jerusalem and then start annihilating Jews and defy the true Christ. But this is heresy! And it this scenario upon which the LEFT BEHIND series is based. But in order for this fanciful interpretation to be true it requires the acceptance of some patently unacceptable hermeneutics (principles of Bible interpretation).

THE LAW OF “DOUBLE REFERENCE”?

With very little effort it can be shown that all of Matthew 24 has been fulfilled. The LEFT BEHIND scholars accept that most of Matthew 24 may have been fulfilled but that the Law of Double Reference demands that it must be fulfilled again. Therefore, although the temple was unquestionably destroyed in A.D. 70, it will be rebuilt and then destroyed again under the rule of the Anti-Christ. This is accepted by dispensationalists even though there is no reference to an Anti-Christ in Matthew 24 or the entire Book of Revelation!

Secondly, there is no reference or indication in Matthew 24 that the events which Jesus foretold would have two fulfilments. In fact, there is no where in Scripture where it teaches a dual fulfilment of any prophecy!

THE DELIBERATE CHANGING OF KEY WORDS!

The Dispensational system requires the changing of key words in Matthew 24 in order to make its highly implausible interpretations have any possibility of acceptance. For example, the use of the word “you” in Matthew 24. Who is “you”? The clear meaning of Matthew 24 is the present disciples. To suggest anyone else is absurd.

Secondly, the meaning of Matthew 24:30-31 is taught as the culminating return of Christ when in fact the text makes no mention of Christ’s return down to earth. In fact, it is a direct quote from Daniel 7 which refers to Christ ascending into the presence of His Father (the Ancient of Days) and receiving the decree to judge Jerusalem. The Matthew 24 text clearly describes the event as the appearing of the Son of Man in the heavens. This is not the final, all culminating return of Christ to Judge all the dead (as described in Revelation 20).

Fourthly, the term this generation is changed by Dispensationalists to read that generation. Perhaps these people have been singing the Pentecostal song “This is that” and they’ve carried over into their Bible reading! This means “this”. When Jesus said in Matthew 24:34 that “this” generation would not pass away before all these things happened, He didn’t mean “that” generation as Tim LaHaye and other Dispensational advocates teach. If we say that this means that then where do we stop with the rest of the Bible?

Fifthly, the word “world” in Matthew 24:14 is the Greek word for the Roman Empire (Gr. = ‘oikoumene’), not the whole earth (Gr. = “ge“). When we consider Colossians 1:5-6, 23 we see that Matthew 24 was fulfilled within the lifetime of the generation which Christ was addressing.

THE RAPTURE IS RUBBISH!

The references in Matthew 24 to one being taken and one left, has nothing to do with rapture but refers to the indiscriminate massacre of the inhabitants of Jerusalem during the Roman catapult attacks. Josephus describes this. The passage in First Thessalonians 4 has nothing to do with rapture – it is entirely about resurrection! Consider the context of that passage and this will be immediately seen. Once these two key passages are correctly understood, the Dispensational concept of a rapture vaporises.

When Christ does finally return to culminate time (Eph. 1:10) and judge the world (Matt. 25) after the Great and General resurrection (Rev. 20) there will be no Anti-Christ figure challenging Him from a rebuilt Jerusalem Temple situated in a reclaimed Judeo-Palestine at the end of Great Tribulation period. All of this fanciful drama might sell books and form the basis for movies and radio plays, but it has nothing to do with Scripture.

You may like to read my unfolding commentary on the Book of Revelation which explains some of these things in more detail. The first 4 chapters are available online now and the entire audio series is also available for free in our audio section.

THE MOST EMBARRASSING VERSE IN THE BIBLE expounds the entire chapter of Matthew 24 and shows why we can know that it is entirely fulfilled!