Explaining “Every Eye Shall See” From A Preterist Perspective
Written by Dr Andrew Corbett, President of ICI Theological College Australia, and author of the popular commentary on the Book of Revelation- The Most Embarrassing Book In The Bible.

Behold, He is coming with the clouds, and every eye will see him, even those who pierced him, and all tribes of the earth will wail on account of him. Even so. Amen.
Revelation 1:7

Another way to render this verse might be: “Behold He is coming with the clouds [in judgment] and every eye will see Him – that is, the eyes of those who pierced Him, and all of the Tribes of the Land [Israel] will wail at this time because of His judgment. Even though this will be devastating, it must happen.”

Rendering the verse this does three things. Firstly, it becomes immediately consistent with the time-frame references in the opening chapters of the Book of Revelation. That is, Christ’s judgment on Jerusalem was seen by those who orchestrated His crucifixion- the High Priest and the Sanhedrin along with all Israel who joined together to kill the Christ.

and plotted together in order to arrest Jesus by stealth and kill him.
Matthew 26:4

It is consistent with the time-frame references in the opening chapters of the Book of Revelation because it plainly states that the events described were to take place soon – “for the time is near” (Revelation 1:3). To argue that verse 7 should be interpreted as referring to the end of time or the end of the world is not consistent with the context and therefore not a literal interpretation. Regarding this verse as forecasting something that was indeed near, at hand, soon, now, about to take place, as it plainly says in Revelation 1:3, is consistent with Revelation’s overall time-frame.

Secondly, rendering verse 7 this way is consistent with the other Biblical uses of the expression coming with the clouds which refer to God’s judgment on a people from Heaven. When the God of Heaven interacted with Moses, He is described as being surrounded by clouds (Exodus 19:9) and He chose to give the Hebrews a picture of His majesty and great glory with “clouds”-

The glory of the LORD dwelt on Mount Sinai, and the cloud covered it six days. And on the seventh day he called to Moses out of the midst of the cloud.
Exodus 24:16

God gave His people the picture of His glory being represented by clouds. Therefore, when it says that God is coming in, or with, clouds we must be careful not to think of this just in a wooden literal sense. It more often than not is a word picture of God’s glory. On numerous occasions throughout the Old Testament, God’s glory did literally appear as a cloud to people (eg. Numbers 9:19). But as the Old Testament unfolds God takes this concept and creates the metaphor of clouds to speak His glory. Thus, whenever He judged on Israel’s behalf, He is often described as doing so by ‘visiting’ the nation to be judged ‘riding clouds’.

¶ An oracle concerning Egypt.
Behold, the LORD is riding on a swift cloud
and comes to Egypt;
and the idols of Egypt will tremble at his presence,
and the heart of the Egyptians will melt within them.
Isaiah 19:1

Thirdly, rendering the verse this way is consistent with the complementary Biblical passages (the broader context) which make clear time-frame references to the generation of Revelation’s original audience. In particular, the Olivet discourse of Matthew 24, which most scholars recognise as a parallel to the Book of Revelation, plainly says this in verse 34 (“this generation…shall see all these things”). Understanding Revelation 1:7 as speaking to and about the first century audience makes any other rendering of this verse as yet future implausible. In what other generation, apart from the original generation to which Revelation was addressed around 65AD, could the qualifying statement about every eye shall see – even those who pierced Him – apply? If we force the interpretation of the text to be prophetic of our future, the fulfilment becomes impossible. That is, far from the Preterist interpretation of Revelation being disqualified by this verse, it is actually only the Preterist interpretation that offers any hope for this verse to be fulfilled!

ALL THE TRIBES OF THE EARTH

The expression “all the tribes of the earth” sounds global. But it is almost certainly not. The Greek word for “earth” is ‘ge’ (geology, geography), which is translated as “earth” or “land”. This word is used to designate the Land of Promise, Israel. It is perfectly natural to understand Revelation 1:7 as referring to all the tribes of Israel. This understanding is consistent in the three ways discussed earlier (1. The Textual Time-Frame Indicators, 2. It Is Biblically Consistent, and, 3. The Broad Biblical Context). In this light, we are logically, reasonably, and rationally left to conclude that the author intended to convey to his original audience that this verse was indeed to be fulfilled in their life-time. Indeed, I have already shown, this is the only way to literallytake this verse. But, the Futurist might ask- In what way then was this verse possibly fulfilled?

I have already shown that the expression the Lord is coming is a Biblical expression of God’s looming judgment. It is the classic understanding of the Church that Christ will return. This is where Classical Preterists and Hyper-Preterists part company. Pantelogists (Hyper-Preterists) regard all Bible prophecies as being fulfilled, whereas, Classical Preterists (Partial Preterists) distinguish between Christ’s coming in judgment on Jerusalem and His eventual return. There is historical support for this view dating back to the second and third centuries. Nearly all Biblical Commentators prior to the 1800s took for granted that the Olivet Discourse (Matthew 24) was fulfilled with the destruction of Jerusalem in 70AD. This can be readily verified by sourcing a very commonly available old commentary such as Matthew Henry’s. Both the Hyper-Preterist and the Futurist Dispensational interpretation were unknown prior to the early 1800s. Naturally both schools of interpretation disagree with this assertion, but the challenge for Dispensational Futurists is to find any Biblical Commentator or Scholar who wrote anything about an invisible return of Christ to rapture the Church to then be followed by a physical return of Christ with the Church 3 to 7 years later! The same challenge applies to Hyper-Preterists to show any Biblical Commentator of scholar accepted by the Christian community as orthodox who claimed that Christ had already returned and that the General Resurrection referred to First Corinthians 15 had already taken place. On the contrary, both Paul (2Tim. 2:18) and the corpus of Biblical Commentators and scholars down through the ages have both denounced the heretical view that the Resurrection of all the dead had already taken place!

How then can we claim that Revelation 1:7 has been fulfilled? Having shown that it could only have been fulfilled in the first century AD, we can then integrate it into the whole message of The Book of Revelation and the Olivet Discourse and show two things clearly: (i) Both the Book of Revelation and the Olivet Discourse of Matthew 24 intended to convey prophecies regarding the times leading up to 70AD (note the time-frame language~ “now”, “at hand”, “this hour”, “near”, “shortly”, “this generation”); (ii) It can be shown historically that the events forecast in Revelation 1:1 – 20:5-6 (at this point in the Book of Revelation the time-frame changes) have been fulfilled. That is, the inhabitants of Jerusalem in 70AD literally saw the coming of God’s judgment upon them for their apostasy. “Every eye” saw it. “All the tribes” of Israel saw it.

The Partial-Preterist (Classical Preterist) view of Bible prophecy is completely orthodox. It is Christo-centric. It is Biblical. It conforms to the ancient 4 Creeds of the Church. It is verified by history. It is commended to you in my ebook THE MOST EMBARRASSING BOOK IN THE BIBLE, which you can download immediately. 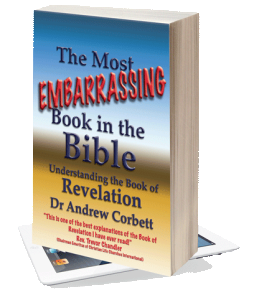