home > articles > What The Bible Teaches About Divorce

Divorce is not only one of the most embarrassing, humiliating experiences any person can go through, it is also one of the most painful. Too many people divorce, and too many people divorce for the wrong reasons. Divorce is usually the result of one of, or all of, three reasons: infidelity, lack of preparation, communication breakdown. It is my informed opinion that if more couples approaching marriage could hear from more couples who have divorced, there would probably be fewer couples marrying – at least, not until they had had some marriage preparation coaching.

The ending of the legal union between two married people is called divorce. Throughout most ages and societies forms of divorce have existed. Divorce is an unnatural act. Christ made this clear when He responded to the Pharisees in Matthew 19:8-9 ~

Jesus replied, “Moses permitted you to divorce your wives because your hearts were hard. But it was not this way from the beginning. I tell you that anyone who divorces his wife, except for marital unfaithfulness, and marries another woman commits adultery.” 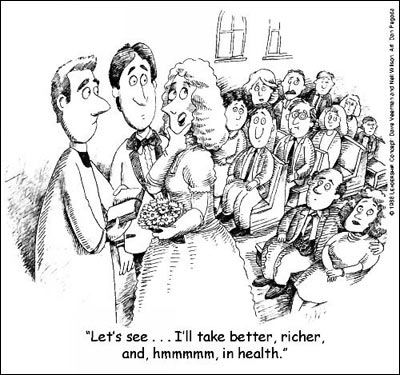 Yet the reality of life is that divorce is not only common, but often necessary for people’s well-being. Even some Biblical men of God suffered the pain of divorce. These include Moses, who sent Zipporah away (Ex. 18:2), David- who apparently divorced Michael (2Sam. 6:23), and Hosea the prophet. In our modern era divorce is becoming so common among those in the professional ministry that denominations are scrambling to form policies governing ordination and remarriage.

The Bible recognises the prevalence of divorce. In the Old Testament it wasn’t instituted, but rather legislated. That is, it was an established practice, much like slavery was. Unlike the demeaning practice of divorce among pagans, God legislated for His people to regard marriage as a sacred institution, and for divorce not to be taken lightly (Deut. 24:1-4). Based on ancient writings, such as the eighteenth century BC “laws of Hammurabi” and the “laws of Eshunna”, we know that marriages were often arranged by parents; the marriage was meant to be lifelong; a husband expected fidelity from his wife and could exact the death penalty for adultery.  We assume that the ancient Hebrews would have been influenced by this cultural setting.

The Pentateuchal passage on divorce, Deuteronomy 24:1-4, recognises that divorce was a common social ill. Unlike the translation of the King James Version, this passage is not commanding a man to divorce his wife if there is some “uncleanness” in her, rather (like the more recent translations render it), it is accepting and legislating what was already taking place within their culture. This is set against the backdrop of Yahweh already having given commands for a man not to divorce his wife-

They shall fine him a hundred shekels of silver and give them to the girl’s father, because this man has given an Israelite virgin a bad name. She shall continue to be his wife; he must not divorce her as long as he lives.
Deuteronomy 22:19

He shall pay the girl’s father fifty shekels of silver. He must marry the girl, for he has violated her. He can never divorce her as long as he lives.
Deuteronomy 22:19

Even these early references in the Old Testament to divorce show that God’s intention was that marriage was to be a life-long union between a man and a woman. Toward the end of the Old Testament era, just after Ezra and Nehemiah had instructed the Jewish men to divorce their foreign wives (Ezra 10:11), Malachi was inspired to write-

“I hate divorce,” says the LORD God of Israel, “and I hate a man’s covering himself with violence as well as with his garment,” says the LORD Almighty. So guard yourself in your spirit, and do not break faith.
Malachi 2:16

Thus the Old Testament closes with God declaring that He hates divorce. Despite this, the Pharisaic element in Judaism had developed so legalistically that they had made divorce almost inevitable for women who dared defy the slightest whims of their husbands. Consequently, it wasn’t long before Jesus was shocking even His own disciples with His candid views on marriage being for life-

Some Pharisees came to him to test him. They asked, “Is it lawful for a man to divorce his wife for any and every reason?” “Haven’t you read,” he replied, “that at the beginning the Creator ‘made them male and female,’ and said, ‘For this reason a man will leave his father and mother and be united to his wife, and the two will become one flesh’? So they are no longer two, but one. Therefore what God has joined together, let man not separate.”
Matthew 19:3-6

Christ’s teaching on marriage reflected the heart of the Old Testament teaching. Provision was made under the Old Testament for a man to divorce his wife in a situation of marital unfaithfulness (Dt. 24:1-4). Christ simply reinforced this truth. His statements about fornication and adultery in Matthew 5:32 are plain. While some attempt to make a distinction between these two particular words used in the King James Version, often done to justify the grounds of divorce, Christ’s intent was clear: marriage is the lifelong union between two parties which is violated in no more serious a fashion than in sexual activity outside of that relationship.

The only other New Testament passage on divorce is Paul’s writings to the Corinthians in 1Corinthians 7. In this one chapter he commands against divorce on four separate occasions. In the Book of Hebrews, it reinforces the overall message of Scripture regarding marriage and grounds for divorce-

Marriage should be honored by all, and the marriage bed kept pure, for God will judge the adulterer and all the sexually immoral.
Hebrews 13:4

Taking to heart Paul’s teaching in First Corinthians 7, divorce is never an option for a Christian couple. It is an option however in a situation where one of the partners is violating the marriage covenant through sexual misconduct. Because of the rarity of wives being physically violent towards husbands, it is also an understandable step for a wife to take if she chooses to divorce a violent unrepentant husband. In cases like this, the wife is best advised not to seek to enter into another marriage. Thus the seriousness of the divorce implications can be taken too lightly by someone in this situation. Where a Christian has been involved in a divorce before coming to Christ, his/her past is washed away and they are free to get on with their life without the weight of condemnation. For a Christian leader to divorce is a shameful thing. It is shameful that it came to this point, and secondly that they proceeded with a divorce despite the clear teaching of Scripture.

Some justify their divorce by claiming that they married the wrong person. For Christians seeking a divorce this sounds like a reasonable justification. Two things can be said about this. Firstly, if you rushed into your marriage and married with grave reservations – you may very well have “married the wrong person”. This is a warning to the not-yet-married that marriage should not be entered into lightly, or involuntarily, or without due coaching preparation.

I recently heard the sad story of a Baptist girl who was swept off her feet by a high school jock. In a night of alcohol and beach-sand (which she knew was strictly against her parents standards) she was sexually taken advantage of by this “man”. Her misinformed conscience told her that she had marry the one she had sex with and was now pregnant to. In a few months she found herself married to someone she not only didn’t love – she didn’t even really know. Her dysfunctional understanding of what a Christian wife was led her to quickly have two more children. But her husband was becoming increasingly abusive. He joined the military. While he was away and there was peace in her house, she first began to learn of his infidelity. She found that two weeks before they were married he was having sex with other women. Since being married he had continued to philander. He even boasted to his buddies that his wife would never leave him because she was a stupid Christian wife who did everything he told her to do. On a home visit, he became intensively abusive to her physically. She wrote to her parents, “I know I will go to hell for what I am doing, but I cannot stay in this marriage anymore! I would rather endure hell for eternity than remain in this marriage! I go to church and get told that divorce is the unforgivable sin and feel the condemnation of those who look down on me.” Fortunately though, this story does not end here. She found a church community that didn’t judge her – on the contrary – they loved her, accepted her, and supported her. She found that God did not regard divorce as the unforgivable sin. She discovered that she had made a mistake to believe that she had to marry this man. God has been able to redeem her.

Secondly, you may have married “the wrong person” but God can redeem the situation. Where two people in a strained marriage are prepared to receive some coaching, they can rebuild their tattered marriage.

Before a couple divorces they should reconsider their marriage vows. In sickness and in health…For better or for worse…For richer or for poorer… These are sombre words being vowed. To divorce to end a toxic relationship may not necessarily be wrong – but to divorce because you’ve got a better offer is wrong and sin. Anyone divorcing so that they can marry someone else has no legitimate grounds for their divorce!

Christians should regard divorce as an enemy. While more and more people are being seduced by this enemy, including Christians, we must practice the love and grace of God by accepting people despite their failures. Learning how to deal with society’s divorcees will be a positive step for the Church to take in reaching this dying generation. Marriage should not be entered into hastily, involuntarily, or unprepared. But the same can be said for divorce. Divorce should be avoided and the best way to ensure this is to marry well (appropriate courtship, pre-marital counselling). But divorce is not irredeemable nor is it the unforgivable sin.