home  >  articles  >  Book of Revelation  >  Revelation Can Not Be A Revelation If Doesn’t Clearly Reveal Something!

Written by Dr Andrew Corbett, President of ICI Theological College Australia, and author of the popular commentary on the Book of Revelation- The Most Embarrassing Book In The Bible, August 15th 2011

The revelation of Jesus Christ, which God gave him to show to his servants the things that must soon take place. He made it known by sending his angel to his servant John,
Revelation 1:1

There is a certain hang-over from Post-Modernism that makes the idea of the Book of Revelation being divinely vague very appealing. Post-Modernism relishes in the idea that nothing can be known for certain. It despises the notion of being ‘right’ and extols the notion of uncertainty. In presenting a case for how the Book of Revelation can be understood, Post-Modernist Theologians will protest that this is just one of the many ways that it can be interpretted. This dismissal fits their larger idea about how the Bible can be interpretted in a singular fashion. It promotes the concept that a Biblical text can be validly interpretted a number of diverse ways simultaneously. To hold a contrary view to this Post-Modern approach is to be accused with the worst name-calling a Post-Modernist can employ to belittle their objectors: narrow-minded and dogmatic. (Which ironically seems like a rather narrow-minded and dogmatic objection.)

The Deuteronomy 29:29 is hardly a Biblical justification for the Post-Modernist to substantiate their claim that the Book of Revelation cannot be interpretted accurately and singularly.

The secret things belong to the LORD our God, but the things that are revealed belong to us and to our children forever, that we may do all the words of this law.
Deuteronomy 29:29

If Deuteronomy 29:29 can be appealed to by anyone in regards to the Book of Revelation, it is surely the one who claims that God has revealed something to His people – which He intends to be understood – since it says that the things that are revealed belong to us and to our children forever, that we may do all the words of this law. Just because there has been a diverse range of alleged interpretations of the Book of Revelation does not mean that they are each equally valid or that one of them in particular may be the singularly and exclusively correct.

There are generally considered to be 4 Schools of Interpretation when it comes to the Book of Revelation. (There are actually many more, and even many many more when we consider variants of each major school of interpretation.) But the Post-Modernist who finds words like: “wrong”, “incorrect” and “false”, too harsh to employ when assessing any idea, is averse to describing any School of interpretation with these terms. But this hermeneutical-relativism is both unnecessary and illogical. Each interpretative idea should have its claims assessed and evaluated. Where should this assessment begin?

The revelation of Jesus Christ, which God gave him to show to His servants the things that must soon take place. He made it known by sending His angel to His servant John,
Revelation 1:1

There are general principles for interpreting Scripture that should equally apply to the Book of Revelation. These principles are based on the following foundation-

1. God intends to convey something to His people which can be understood (otherwise it is not conveying anything).

2. What God intended to communicate is discovered by interpretation of the text based on familiarity with the penman, audience, circumstances, vocabulary, literary style, and occasion. This is called exegesis and is the first step in hermeneutics.

3. While there can only be one correct interpretation of a text, there can be several reasonable applications of a text.

4. Where Scripture states an interpretation of its own text, we need not disagree with it and look for additional interpretations. This especially applies to Biblical prophecy where a prophecy is given and recorded as being fulfilled. For example, Isaiah’s prophecy that a virgin would conceive a child is stated by Matthew to have been fulfilled when Mary gave birth to Jesus. It seems unecessary to think that this prophecy might have multiple fulfilments – even into the future.

In addition to this, there are general principles of Bible Interpretation that include allowing for the principles of exegesis stated above and excluding the ideas that words are “unequivocal” (always one meaning, in English an example of this might be the word “bear” which most dictionaries give 8 different definitions for!) or act as part of a “code” (which renders the particular words themselves as pointless and meaningless).

Considering these principles of interpretation, the reader is invited to read the Book of Revelation with the exegetical question always in mind: What did the original Turkish audience in A.D. 65 understand when they read this? When they read words like “soon”, “now”, “at hand”, “this hour” – what did they think Christ meant to convey to them through the Apostle John? When John told them that “with wisdom you can know who I am referring to” (Rev. 13:18) would they have thought that John was being clear or vague? When John told them that the city he refers to as “Babylon” was also like “Sodom” and “Egypt” “where they crucified the Lord” could they have possibly thought of any other city apart from Jerusalem? (Rev. 11:8) When John told them of 7 kings where one of those kings was now reigning over them, could they have reasonably thought of anything other than the Roman King currently reigning (which was Nero, whose gematria adds up to 666)? (Rev.17:8) 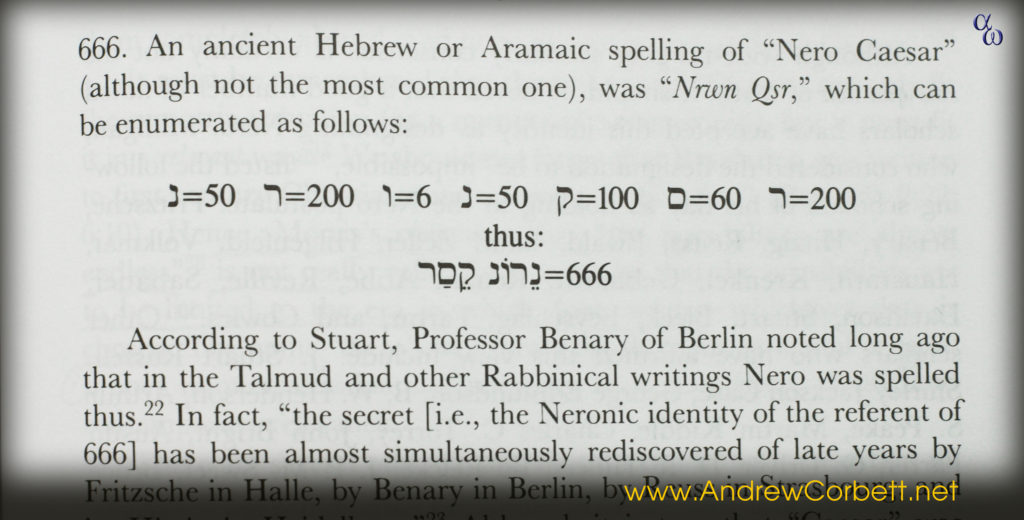 The Historicist Interpretation commits an equally obvious error by assuming that the events described in Revelation were not for the original audience, but was for unfolding over the centuries culminating in the events, coincidentally, around the time this School of Interpretation was devised (around the time of the Reformation). But this makes a mockery of the clear time-frame references in the Book of Revelation and bewilderingly allegorises actual churches as epochs of church history.

The Full (sometimes referred to as ‘hyper’) Preterist Interpretation commits a less obvious error since it correctly examines the past to see if what was prophesied refers to what is now fulfilled events, but then fails to take into account the context of the original audience not agreeing with their conclusions. The Full Preterist (Pantelogist) considers all of the Book of Revelation’s prophecies as being fulfilled. Not even J.Stuart Russell, perhaps the most famous Full-Preterist, is prepared to say that he was certain that the last three chapters of the Book of Revelation were definitely fulfilled. The fact that none of the earliest Church Fathers wrote in support of the Full-Preterist position is cause for reflection too. And the Full-Preterist interpretation of the Book of Revelation does not concord with other eschatological Scriptures which speak of a “final” day – not merely a day where the Temple Age would end (John 5:28-29; 11:24; Acts 17:31).

Secondly, without a reasonable familiarity with the Old Testament, there can not be a reasonable understanding of the Book of Revelation. At least 60% of the Book employs terms, concepts, and metaphors from the Old Covenant – particularly from the language of the Tabernacle. When we read of candles, scrolls, beasts, trumpets, we are reading things that already had associated meaning for the original audience because of their Old Testament familiarity.

Thirdly, any interpretation of the Book of Revelation must concord with all other eschatological passages in the Scriptures. How on earth can a Futurist accommodate Matthew 16:28 without reverting to nonsense? How on earth can a Historicist accommodate Matthew 24:34 without a similar appeal to incredulity? How can the Full-Preterist dismiss the Gospel references to international judgment in Matthew 25 (as distinct from national judgment referred to in Matthew 24) by claiming their fulfilment by A.D. 70 – and how can there possibly be now a time of “no more pain, no more sorrow, no more tears” (Rev. 21)? For the Full-Preterist to argue that this is now a heavenly climate begs the question as to what climate heaven endured before A.D. 70 and why was that the case???

The Partial-Preterist (Classical Preterist) view of Bible prophecy is completely orthodox. It is Christo-centric. It is Biblical. It conforms to the ancient 4 Creeds of the Church. It is verified by history. It is commended to you in my ebook THE MOST EMBARRASSING BOOK IN THE BIBLE, which you can download immediately.