I’m a Conservative Pentecostal Classical Idealistic Preterist, although I’d prefer the label- Christian. I welcome the scrutiny of my views and expect the need to defend them. I therefore expect to be able to do the same with others and their views. Central to my view is the unique authority of Scripture which reveals that Christ is Cause, Reason, and Purpose of life. From this fount my understanding of Bible Prophecy flows. Most Bible prophecy is fufilled therefore in Jesus Christ. His coming as Messiah and Saviour was the core of Old Testament prophetic hope. But one very popular and vocal Bible Prophecy teacher, John Hagee, has now declared that Jesus did NOT come as Messiah. He now promotes a concept that God has two means of salvation: one by faith in Christ, the other by being born a Jew. He asserts that Jesus Christ did not claim to be the Messiah and therefore the Jews did not reject Him as their Messiah. Even the novice Bible reader should detect how wrong this is. Hear for yourself-

John Hagee is promoting the logical extension of “Dispensational” Eschatology. His method of interpreting the Bible can be tested from both history and Scripture. Upon examination of his teachings it will be shown that he is wrong, wrong, wrong!

It’s time for Christians to re-examine what teachers like Hagee have taught regarding Bible Prophecy. 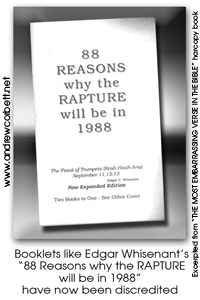 Dispensationalism has reached its peak with the Left Behind phenomenon. Its new champions include Tim LaHaye, John Hagee, Kenneth Copeland, Jack Van Impe. Almost without exception, all of the predictions these teachers have made (based on their Dispensational interpretation of Bible prophecy) have not only not come true, at times the degree to which they have been wrong has been dangerously alarming. Who could forget the avalanche of supposed Bible Prophecies these teachers promoted that predicted the total collapse of the world banking and airline systems with the Y2K bug?! I have detailed some more of these faulty predictions in another article. But the exposure of this faulty method of interpreting the Bible and Bible prophecy has not only embarrassed Dispensationalism, it has hastened its inevitable demise!

Many Christians have been quick to realise the inadequacies of Dispensationalism but have not known what to replace it with. This vacuum has increasingly been filled by Preterism (from the Latin word ‘praeter’ which means the past). There are two types of Preterism. The first is Full Preterism(also known as ‘Hyper’ Preterism or Pantelogy) which regards all Bible prophecy is fulfilled. The other is Partial Preterism (also known as ‘Classical’ Preterism) which regards most Bible prophecy fulfilled – except the return of Christ, the Resurrection, Final Judgment, and the New Heaven and Earth. Partial Preterism agrees with ancient Creeds of the Church while Dispensationalism and Full Preterism do not. The difference between Full Preterism and Classical Preterism is explored in more detail [here]. Some very respected Bible teachers have adopted the Partial Preterist position. These include: Dr. R.C. Sproul, Steve Griegg, and Hank Hanegraaff. One of the best cases for the Partial Preterist position is the eBook- The Most Embarrassing Book In The Bible which can be immediately downloaded to your computer and read off your screen or printed out.